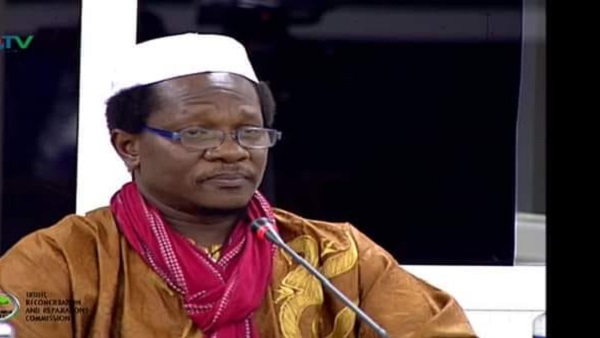 To err and then to stand up to declare one’s error is indeed a mark of courage and leadership in itself. For that matter Sanna’s testimony is positive. By his testimony he has also enhanced the credibility and visibility of the TRRC. Thirdly his testimony will serve to promote truth telling by future witnesses hence limit the incidence of lying because in his testimony he did not leave anything behind.

However, the courage of a perpetrator to own up to his atrocities must not be confused with courage in which an individual would stand up to defend sacred principles and noble causes even in the face of grave danger to his life. The atrocities Sanna committed as Vice Chair were not meant to uphold sacred principles or defend a noble cause. Rather those violations were meant to settle scores and to eliminate those he perceived to disagree or threaten his position for which he classified them as enemies.

Let us remember that we will never hear directly from the late Basirou Barrow, Dot Faal, Gibril Saye among others about their side of the story of November 11. It could be that their reasons and the events that unfolded were totally different from what Sanna Sabally has told the TRRC. Hence Sanna’s story is the story of the victor and typically the hunter will always glorify himself over the hunted. As Vice Chair Sanna had the option to apply the rule of law or due process to ensure that arbitrariness and impunity did not take root in the society! He failed to do that and therefore what he himself came to suffer was indeed his own handiwork.

Therefor the AFPRC regime committed international crimes, i.e. crimes against humanity such as murder, torture and grave violations of the dignity of the human person. These crimes including rape, enslavement, forced labour and grave forms of sexual violence are prohibited by international law. No human being must be subjected to these violations under any circumstances and for any reason regardless. International law further requires that all states prevent the commission of these crimes within their territory and anywhere else in the world and further take active stand to ensure that perpetrators are brought to book wherever they are.

As a government the AFPRC is obliged by both the Gambia Constitution and international law to prevent murder, torture, sexual violence among other crimes. Hence as Vice Chair Sanna Sabally had legal and political obligation to ensure that such crimes were not committed in the Gambia, i.e. neither by himself nor by officers under his command. Sanna therefore has committed international crimes just as the rest of his junta colleagues and their soldiers who participated in carrying our extra-judicial executions, torture and other inhuman and degrading treatment.

From this perspective it would appear therefore that Sanna knew the gravity of his actions and therefore properly advised himself to show up before the TRRC to speak the truth and take responsible for his actions and inactions. This is commendable but it is more in his own interest than anyone else because as a violator of international law there would be little space, if any for Sanna to have escape if he decided to run away or lie. Sooner or later the world will get at him.

His decision therefore to face the TRRC and speak the truth helps to reconcile himself with his past and therefore give him relief. Above all his testimony could serve to hugely mitigate the consequences of his actions on himself because of his amazing cooperation and truthfulness. Hence by his testimony Sanna has also created an enabling environment for his co-perpetrators to also have the courage and wisdom to come forward to confess and seek apology from their victims and the nation.

But it will be misplaced for one to jump to conclusion that therefore Sanna is a hero or should be forgiven just because his testimony is seen to be truthful or honest. This would mean that one has forgotten that in the first instance Sanna was a state agent at the highest level who had the legal obligation to uphold the rule of law, protect human rights and prevent abuse of power. There is no excuse for him to abandon this obligation.

His claim that he was only 27 years is meaningless since he knew his age then, yet he decided to conduct a coup and lead a government!
Hence after he deliberately damaged these legal and political obligations one must not therefore merely be carried by his eloquence to therefore exonerate or celebrate him. The issue should not be how a person of responsibility failed his responsibility in the first place only to come back to beautifully explain how he failed in his responsibility and therefore we get carried by the explanation. For example, an armed robber who faces the police in a fierce gunfight during robbery and eventually escapes would indeed give a rather dramatic and brave story about how he stood his ground. However, his act of robbery in the first place cannot be conceived as bravery!
The ordeal that Sanna himself went through is a testimony of the clear and direct danger his leadership created and nurtured. He was severely tortured simply because he had created in the first place the situation for torture to prevail in the country.

Thus, much as I sincerely sympathise with his ordeal for which his torturers must also face justice, I will not however ignore the fact that Sanna, as the Vice Chair of AFPRC set the precedence of what he became a victim. As he himself said what goes around comes around!
Sanna has spoken well and took full responsibility for his actions which in itself is a show of responsibility. I hope his other three surviving co-perpetrators, Yaya Jammeh, Edward Singhateh and Yankuba Touray will also advise themselves in their own best interest to face the TRRC and narrate truthfully how they reneged on their legal and political obligations as state agents. Having been mentioned adversely multiple times for the most gruesome crimes it is clear that these individuals cannot escape justice sooner or later. Hence the earlier they come out to state their roles and actions truthfully the better for them in many ways.

Facing the TRRC has only one option for witnesses which is to tell the truth and nothing but the truth. This is why witnesses swear on the holy books and it is criminal offence to lie under oath. The right to the truth is an inalienable right of victims and their families first and foremost. And no one has more responsibility than the State and witnesses to divulge the truth!
As citizens we must not react to witnesses and their testimonies as if it is drama or allow emotions to take the best of us. We must bear in mind that we have the TRRC in the first place because there were massive human rights violations committed by perpetrators who have, in the first place moral, legal and political obligations of the highest order to protect human rights and adhere to the rule of law. Yet these duty bearers failed woefully.

Hence if they should come before the TRRC to narrate their story, we must not in any way therefore allow their eloquence, truthfulness, experiences and emotions to overwhelm us to the point that we ignore or downplay their outrageous actions in the first place.
Let us remember that as perpetrators testify their victims are already dead while surviving victims are in pain and the society as a whole has been severely damaged.