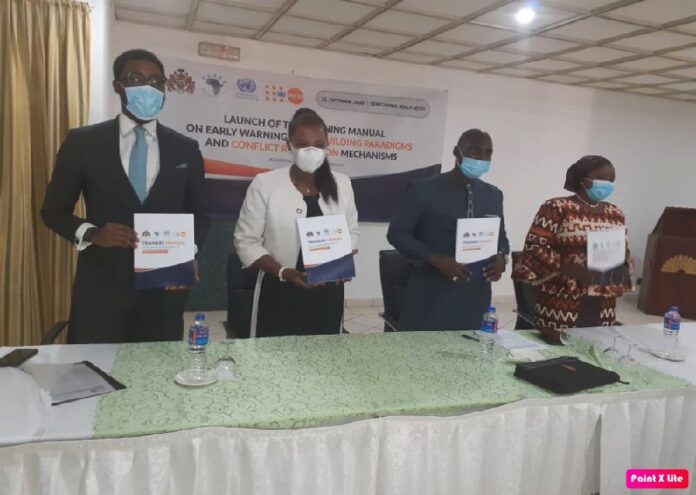 Speaking at the launching, Kunle Adeniyi, Representative of UNFPA, said to support peacebuilding efforts in the Gambia, UNFPA in 2019 through UN peacebuilding funded project on increasing women and youth participation in decision making and as agents of community conflict prevention.

“The training created a pool of trainers that have been capacitated to uptake and step down early warning peacebuilding training.”

He stated that the outcome of 14 days of training was the development of a national training manual on early warning peacebuilding paradigms and dispute resolution mechanisms.

Mr. Adeniyi added that in the upcoming 2021 electoral cycle, it is indeed timely that standard training on early warning and peacebuilding is adopted and embedded.

The democratic transnational period in The Gambia has indeed evidenced relative vulnerability due to many reasons including poor governance, perpetrators of human rights violence by the previous regime, low awareness on civil, politics, social rights, ethnic rivalry on political lines, misinformation through online, print and social media.

According to the 2019 conflict development analysis, young people are the single most important demographic of the Gambia today in terms of their number and ability to author and influence the transition in stabilizing or destabilizing ways, with 60% of the population under the age of 25.

The 2030 agent for sustainable development defined sustaining peace as the process of building a common vision of society.

Peace remains the critical bedrock of every developmental process, and it does not mean the absence of conflict but rather early identification of conflict triggers and their amicable resolution through dialogue, education, knowledge ledge, and human intervention.

Seraphine Wakana, UN coordinator in the Gambia said the UN was established to “save succeeding generation from the scourge of war”. The training manual fulfills one of the recommendations from the conflict and development analysis report from 2019 with emphasis on the need to mainstream process-orientated methodology with gender, conflict management, meant, and dispute resolution resource for peacebuilding and conflict management practitioners.

The primacy of national stakeholders is key in sustaining peace and the inclusive of women and young people. The UN peacebuilding is funding many projects including the national justice process (which establishes the TRRC and the national human rights commission ) security sector reform, good governance and leadership p, resolution of land dispute, women and young participants of returnees migrants, rule of law and climate change adaptation.

Madam Wakana said she is encouraging UNFPA and WANEP to go further and translate their widely spoken local languages to increase the reach and benefit to the population.

“I wish to conclude by encouraging all peacebuilding stakeholders from the government, CSO, Development partners, and all UN agencies capacities for the maintenance of peace, security, and stability”.

Assan Tankara, PS Ministry of Interior, said the UN through its agencies such as UNFPA have and continue to demonstrate a strong commitment to supporting the government, civil society organizations, and peacebuilding practitioners inefficiently contributing to the stabilization agenda of the Gambia.

P.S Tankara said these reforms are geared towards offering an opportunity for multi-stakeholder participation and interface between the citizens and the state. “This, as a result, will promote inclusive conflict prevention and resolution mechanism that stabilizes our development and enables the country to regain its credibility”.