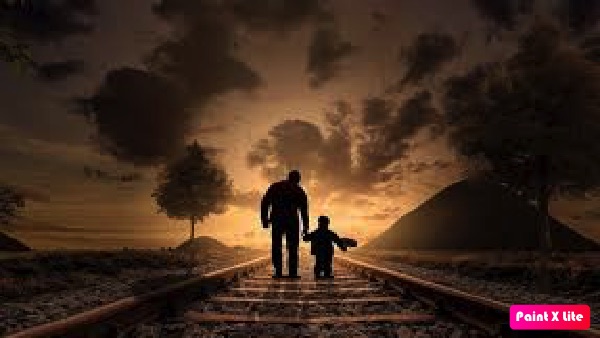 Since I was born, nobody had ever identified himself to me as my father. Not even a picture of him had been  shown to me either by my mother or my grandma. I have been living like one without a father. At some point, I gave up asking about my  father until recently when a man appeared before us. This came with a rather strange information. He is tall, handsome and fair in complexion. He confidently told us that he is my father. Such a bold claim punctuated with  a vivid show of ownership put me in  a confusing situation. At first, I didn’t believe in it thus igniting little interest on my part. However, the man sounded even more serious and I could see a sign of consent written all over grandma’s face. As a young man, I knew about secrecy, so I  decided to give a break for a private conversation. I stood by the door of my room, listening to the conversation but none of them realised my presence. After a couple of minutes, not so clear to me, the two elders adjourned the conversation for the next day. Thereafter, I left for school to collect my WASSCE  results beaming with an expectation of getting a schorlaship to pursue further studies in  Public and Environmental Health.

I have been living with my Grandma and some of my uncles for God knows how long. My granny is my everything. My mother lives in the village and I only see her once or twice in a year. I knew that my mother’s husband isn’t my biological father. I can remember vividly, the first time I asked my grandma about my dad when I was in the 6th grade. She told me that my dad initially   took the ‘back way’ when I was two months old. She said it took them over two years to hear anything from him and that they were later notified that he was dead. At that tender age, I felt bad. “I’ll never see him again,” I said to myself. I couldn’t cry because I’ve never seen a picture of him neither did I know him in person. So emotionally, I was not that much disturbed.

I actually believed all what my grandma told me. Although I was having misgivings as to why none of my father’s family ever visited me and had never helped me. I’ve never seen any of his relatives. This was too difficult to comprehend.

As a child growing up, I was closer to granny than mum. I’ve never asked my mum about my father and, in fact, she’ll never give me that opportunity to ask her such a question even though I have a right to know my father’s relatives.

I share the same surname with my mother and her brothers, whom I called uncles. They are like a father to me. I must say, I enjoyed everything that a child needed except , being in the company of a biological father. I consider my surname as Phatty and I can take a bullet in my chest defending the surname at any required time in defence of the family name.

The man who claimed to be my father promised to come back in the afternoon couldn’t make it but came back the following day, which  fell  on a Saturday and not a school day. As soon as he alighted from his swanky car, grandma hastily called me and asked me to hide. With bells on, I told her why should I hide from the man when I didn’t commit any crime. Before she even responded , one of my uncles, Musa, came out and asked me to get inside because they were going to discuss something with the man. So I obeyed as instructed. I quickly rushed in to my house. As usual, I could hear the discussion outside.

In the room, I heard the man boldly demanding for me. He said that grandma and uncle Musa do not have any right or power to deny him from taking me. I was scared. I was trembling inside. I could hear a bitter exchange of words between uncle Musa and the man. I clearly heard uncle Musa asking him how did he even come to  know that I’m alive because he publicly denied being my father even before I was born. Such horrible narrations made me cry. “He must be my father,” I said to myself. After a few more exchange of words, uncle could not cool down his temper. He chased the man out. He  however threatened to report him to police should he  claim for me or come back to the house for the same purpose.

I was weak. The man must be my father. So I cried! Luckily for me, Grandma’s telephone was on her bed, so I quickly took it and dialled my mother’s number. At first, there was no credit. So I took loan via one of the SIM cards and called her. She received. We could not greet each other at all because I wasn’t even with a scintilla of respect and in a confused state. I asked her to exactly tell me who is or was my father. I asked her to tell me everything or else, I’ll hang myself or run to the man claiming to be my father. I felt broken,  battered, disgusted and seemingly  mad I was. However, uncharacterstically of me,  my words to her were naked. I needed to know the whole story because the man just cannot come over claiming for me without genuine reasons. I have been living without a father, so the appearance of this man shouldn’t be lightly taken- so I thought.  I told her to tell me the truth or let her not bother to look for me because I’ll disappear from the agonies of this world for living without a father. Assumingly, she understood the tone of my voice. Her voice was trembling too. Truth was gradually coming out but she wasn’t ready to tell me the hidden truth. On the phone, she promised to tell me the whole truth but only if I could  pass on the phone to Grandma.

I was confused. I threw the phone back on the bed and peeped outside. Uncle Musa was visibly annoyed. He is muscular and tall in the mould of  a Senegalese wrestler. He was very upset and wanted to attack the man. I was inside the house but attentively  listening to the verbal altercation. What actually provoked uncle’s anger was when the man said that his son cannot be living in the village with a poor family. To uncle, this was an insult to the family and he got bitter as he explained it. “What do I do now? ” ” Who should I confide in to know the truth?” “Should I ask Grandma?” “Will she tell me the truth?” I had asked myself all these questions. On granny’s bed, her phone was making a constant noise because of the calls of my uncomfortable mother.

With the look of things, I knew something got messed up somewhere. My mother is a Mandinka and I consider myself a Mandinka since my granny and uncles are all Mandinkas. The man who is claiming that I’m his son is a Serahuleh because I heard him speaking that language in a telephone call. If he’s actually my father, which I strongly believed, gauging the reaction of my uncle, what will happen to me? In school, I am registered as a Mandinka in the ethnicity column and I’m not even sure if this man’s surname is Phatty. I was honestly confused. Uncle was upset, granny was visibly uncomfortable. “I think the man is my father,” I would say this in soliloquy.

Pondering over this issue, I got confused. I just collected my grade 12 results and anticipating to go to the university. I was confused but I said to myself that I have to be convinced as to whether he was my father or n

Season one By Cherno Abdourahman Bah, The Auspicious It was exactly at 07:30 when Oumie called out her husband informing him that the meal was ready. Ebrima...
Read more
Short Story

By Baba Galleh Jallow As they left Alkatan's hut, the woman said something that made the tears fall in Alkatan's heart. Walking a step behind...
Read more
- Advertisment -