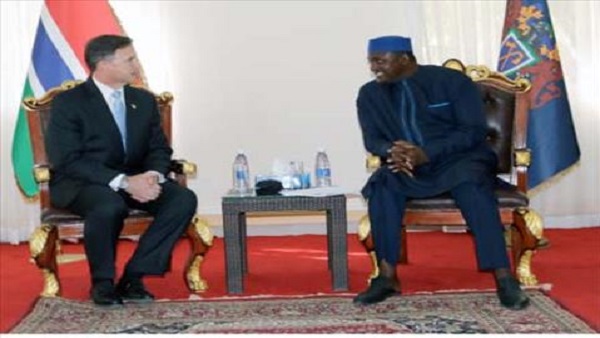 The United States ambassador to The Gambia, Richard ‘Carl’ Paschall, has revealed his government’s intention to assist Gambia recover assets identified by the Janneh Commission to have been obtained through corrupt practices by former President Jammeh and his close associates.

The Ambassador’s comments came barely a day after the Gambia government announced that it is involved in consultations with authorities in Washington for the recovery of Jammeh’s multi-million dollar Potomac residence in Maryland which he bought over seven years ago.

“I want to state emphatically that the government of the United States of America will use every means available to us under our laws to fully support Gambia’s efforts to recover those assets,” he said at the closing of a civil-military relations seminar funded by the US Department of State at Officers Mess.

Jammeh, who seized power in a 1994 coup, accused the Jawara government of entrenching corruption and flamboyant lifestyle at the expense of Gambian taxpayers.

However, Jammeh was found to be more corrupt and flamboyant than the head of a government he had overthrown.

Apart from owning hundreds of houses in the country and abroad, the ousted leader teamed up with others to siphon national wealth.

Ambassador Paschall said the US will spare no efforts to assist Gambia in its recovery efforts stemming from the extraordinary work of the Janneh Commission.

However, he urged the Gambia government to work closely with the National Assembly to take urgent actions to strengthen anti corruption laws and empower the country’s law enforcement and Judiciary authorities to investigate and prosecute those who are found wanting.

“The United States Department of Justice and Department of Homeland Security has specialized units that deal with financial crimes and we already committed to providing support from those units to assist the government of the Gambia in those efforts,” Ambassador Paschall added.

He said the #NeverAgain slogan of the TRRC should not only be a commitment but a promise to be made regarding the abuse of state power to inflict physical harm, death, torture and derive persons of their most basic fundamental human rights granted by the constitution and laws of the country.

Ambassador Paschall said it must also be a promised with regard to public corruption that cannot only apply to past leaders and holders of public office or business people.

“It must apply to present and future corruptions by persons who hold positions of public trust who seek to enrich themselves and their associates with the cost of the public good.

Corruption is pervasive, it erodes the faith entrust by citizens to their government and it cannot be allowed to become common or acceptable,” he added.

He said the US has in the past and right through to the present suffered from public corruption.

“Yes we have corrupt public officials in the US. We talk about corruption with our foreign closest partners because we know more about it; we also know a lot about how to fight corruption through strong anti-corruption laws and aggressive law enforcement investigations and prosecution of those who corruptly rob their fellow citizens not only of their money but of their trust.

In just the first two weeks of June the US Federal Bureau of Investigation has announced the prosecution of eight major corruption cases,” he explained.

Ambassador Paschall described the relationship between the West African country and the United States as very strong.