What defines a family? 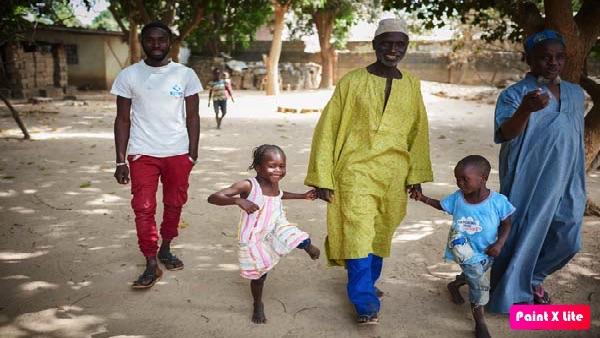 If you should ask someone living here in Sweden, someone whose family has lived here in generations, what is a family, you will surely get the answer: mother, father and some children. This is called a “nuclear family”, which for me has a strange sound. A nuclear bomb is what I come to think of when I hear that name, but family life can truly be a bit explosive from time to time. In the old times people lived in extended families here too, just as in The Gambia. The elderly lived together with the younger ones, and even if it gave everyone a sense of security, it was also a source of conflicts. I’m sure many of think to yourself that you know exactly how it feels. It is not easy for the elderly to let go of the grip of the decision making in the family. It can also be very frustrating for the younger ones to be depending on the elderly.

In The Gambia there are normally only one person who is the main bread winner. This comes with a huge responsibility as you all know. With this responsibility comes a great deal of power, and that power must be used wisely. In the best of all worlds this wisdom is given to all of those who have the opportunity to exercise that power. Unfortunately it doesn’t look that way in the reality and this can be the main source of conflicts in a family. In many cultures the custom is that the man is the head of the family. It’s great if the man is of the responsible kind, who is looking to all the needs of his family and not mainly his own.

The power of money, how small or large the incomes are, can be misused in so many ways. The husband goes to work and when he comes back home he is expecting to be fed and taken care of. The wife has been home, cooking, cleaning, washing, caring for the children and all the others who live in the same compound. She woke up before the husband, early in the morning, and she will stay up later than him in the evening. If she has a baby that needs breast feeding she will not get many hours of sleep. Still the husband is expecting his wife to care for him like he was another child who can’t take care of himself! If he is far away somewhere on a job, he is able to both cook, clean and wash the dishes, but suddenly he is disabled when he returns home. Strange!

Whose fault is it? There are expectations from the society on how men and women are to act.

A friend of mine has several times been called female names when he went shopping for food at the market. His wife was been struggling with her health, and as the good and kind husband he is, he has helped her so she could rest for a while. This is how it should be in a family, a family should work as a team instead of expecting one person to carry the heaviest load. In a team you have a team leader and several co-players. All are just as important and the team can’t succeed unless everyone do their best for it.

The team leader has a vision for the team’s success, but needs to implement these visions with all the co-players. In a football game individual players can’t have their own ideas of where to run, or who to play to. There needs to be a common goal for the play, as well as a common goal for the family. A team cannot succeed without communication about the common goal. There is no room for an individualist in a team, because that is often combined with selfishness. A leader of a family can also be very selfish and treat the other family members as servants, more or less. They are there to satisfy the leader’s every whim without question or argument or they will be punished somehow.

Can you see where this is leading? I began in the small and familiar context; the family, and went on to the sports world. From this world we take the step out to the society and the leader of our country; the president. The president is supposed to act as the ”head of the family”, he is supposed to have a common goal for all of us and communicate that with us. We all know that the communication part isn’t his forte, but he could afford to pay people who can help him with that. There is no shame in getting written speeches, most world leaders do that, but you still need to speak out so people will understand that you actually care. So do you care, me president? I have asked you that before, and I keep coming back to that.

It has been obvious during these four years of Barrow’s power that he is only interested in what benefits him. Those who cling to him are of course interested in the same thing because they eat his crumbles.

”Don’t bite the hand that feeds you!” That is an old proverb and even if it carries a lot of ancient wisdom it can also hide cowardice. How far are you able to stretch yourself before you break? Many Gambians have asked themselves that question and too many have lost their lives because of it. How far will you go for someone who gives you orders, before you halt and change direction? It is easy for me to ask, you might object, and you are right in one way. I haven’t been oppressed by a mad dictator, but I have endured enough for one lifetime.

Don’t be quick to judge, because none of us knows about the other’s struggles. I come from a troubled people, an oppressed nation, a nation of warriors. I have been through Hell and back, my feathers are ruffled but I can still fly. I want to give hope, give encouragement, show that there is a way out of your misery if you try hard enough. ”If there is a will, there is a way.” Find your own way to get a better life, for yourself, your family and your nation.

In a family we can’t sit still and expect to be fed and clothed, we need to carry each other’s burdens and use our abilities so family life will run smoothly. The native Americans had a custom that the one who didn’t work, didn’t get food. Laziness is destructive both for a family but also for a society. Find your creativity, don’t allow others to stop you if you have a great idea. We wouldn’t have electricity, bikes, cars or any other inventions if people in the past had allowed others to stop them. So ask yourself; what kind of future do you want for you and your family? How can that be achieved? Decide for a goal and allow nothing to stop you!