Who would you rather? Wally Secka or Youssou N’Dour? 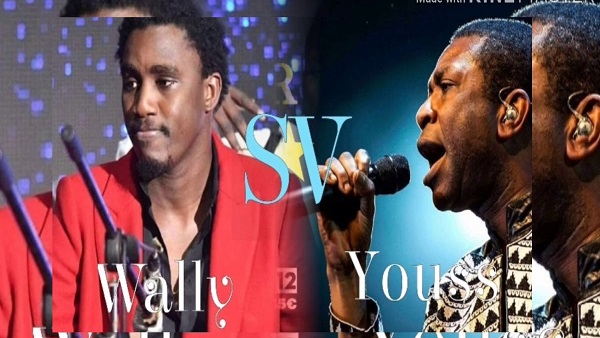 Over the years, the competition between these two legendary musicians sparked by fans from The Gambia and Senegal has grown outrageously big! It has gotten to a point whereby fans of the Senegalese artists would choose whose event to attend and whose to not attend. Just a few days back, Wally Secka performed his annual three day concert and gala dinner at the Qcity grounds in Bijilo and the place was jammed packed with fans dressed to their best abilities. The aura in which people dress was a highlight to show that this event was something planned in their calendars, no doubt about that! No lie, the nights were spectacular! Wally came through as usual and everyone had mad fun! But the big question still remains, to whom does the crown belong? We did a little survey with friends and family and came up with this question; “Between Wally and Youssou N’Dour, who would you rather dine with?” And this is what they have to say…

Amie: FarameenPirr! Wally chi kow chi kanam.
Ndey: Ken du tolaleh Wally ak Youssou Ma jigueen, Youssou du moromsah! Lolululerr la!
Haddy: Halehclass, haleh ambiance, donsopeh Wally Secka rek nak!
Mme Kaddijatou: I really can’t understand why we like to compare between these two artists in the first place. Youssou N’Dour is like a father figure to Wally, he’s been doing music for decades now therefore adopting the name ‘King of Ndaga’. Wally on the other hand is and will always remain another Senegalese artist that looks up to Youssou N’Dour, Baba Mal, and other great musical legends as icon and role model. His music is powerful, yes, but that doesn’t and will never give him the same stance as our “Youssou Ma Jigueen.”
We got a lot of answers from fans all over but we’ll state them out another day, another time. Meanwhile this week is the ground breaking and spectacular event that everyone has been waiting for; Absolute Weekend featuring the “King of Ndaga”, Youssou N’Dour which will take place at the Coco Ocean and Independence Stadium respectively. Hope you are getting your outfits and dancing shoes ready?!