Would you allow Barrow to use the army to intimidate us? 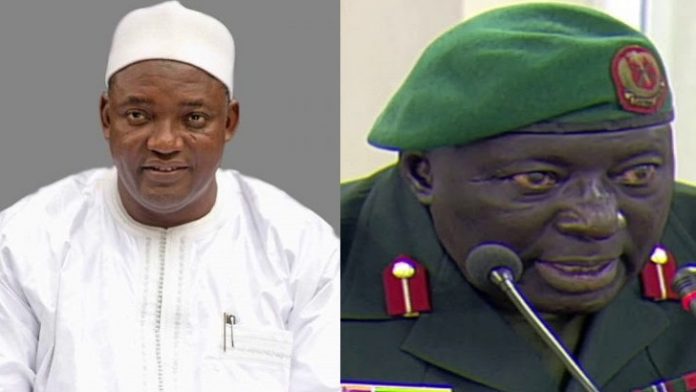 The army commander, General Mamat Cham, recently went on TV to claim that they will crush any protest attempt targeted at the government.

This is a threat directed against the 3 Years Jotna movement.

General Cham equated any protest against the Barrow regime as subversion.

This is the latest attempt by the Barrow government that is desperate to find any way of prolonging its stay in power.

Witness the recent clown show of so-called ‘coalition’ composed mainly of one-man political parties (Mai Fatty and Henry Gomez), a party looking for a patron (NRP) and an unprincipled lady desperate for a place in the Barrow regime (Fatoumata Jallow-Tambajang).

General Cham, like other members of the Gambia National Army imagine themselves custodians or guardians of the constitution.

Unfortunately, by this action, and other pronouncements of General Masanneh Kinteh and scores of senior soldiers below him in the Gambian military, they do not have even the barest understanding of the document and their proper place in a constitutional democracy.

Just as Sanna Sabally insisted that it was the constitutional duty of the military to overthrow a corrupt but democratically elected, we are still stuck with a military leadership that misguidedly believes that they have the constitutional mandate to partake in every sphere of activity in the country.

Just a few months ago, the nation had to endure the laughable spectacle of the military insisting that it only has the power and the discipline to bring about agricultural development.

If the Gambian military and its senior officers have an iota of understanding what their constitutional role is, they would not even dream of going on the media to attempt to intimidate citizens from exercising their freedom.

Irrespective of the intentions of protesters, the military has no role in internal security, which means they have no business to determine what is lawful or permissible. That is the responsibility of internal law enforcement.

Secondly, General Cham and his fellow officers in the military are apparently clueless that in a democracy, freedom of assembly is our right.

They are also unaware that we have the right to hold our leaders unaccountable.

Without accountability, engaging in periodic elections is nothing but meaningless exercise. For an institution that purports to be respectful of the constitution, our military is inexcusably ignorant.

What is so galling about seeing the military being paraded on television to try to intimidate people is that if we had to rely on this institution, The Gambia would still be under the yoke of the Jammeh dictatorship.

The military we have today is an unreformed institution that has all the deficiencies built into it by Yahya Jammeh.

As a result of this defect, just as Yahya Jammeh has used the military as a weapon against the Gambian people, Adama Barrow is attempting to do the same.

A military that has undergone a real reform would not have allowed themselves to be used by a government headed by man with no integrity.

It also shows that the Barrow government has not learnt anything from the Jammeh regime.

This is completely inexcusable given all the revelations of abuse from the security services under Jammeh. But then this not a complete surprise.

After all, Barrow’s government is already engaging in governance malpractice and corruption on a scale that has characterized the Jammeh regime.

And President Barrow has retained and surrounded himself with a core group of Jammeh enablers.

The more Adama Barrow desperately uses ploys to discourage people from making him face up to his lie he made to the Gambian people, the more he demonstrates why he needs to leave power.

Instead of intimidating people, this latest attempt will only motivate people even more to challenge him.

Barrow needs to leave as soon as possible so that real reforms of all the sectors and a real transition can take place.