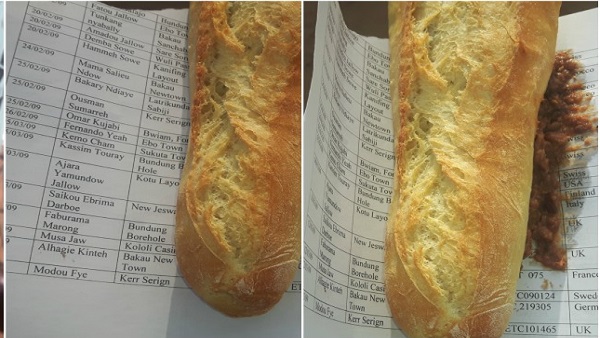 If there are anything hard to inculcate into the brain of a Gambian, attitudinal change tops the list.

Gambians can easily believe in rumors, fabrications, conspiracy theorists to name a few but will always find a way to doubt a scientific conclusion.

Take for instance the viral “Plastic Rice” saga. It was unprecedented to see a population believe story of a lonely newbie semester who “verified” his “fake rice” by its ability to stick together.

Its laughable but I realize that it was excusable for a people used to eating their rice in jollof.

I tried explaining to some friends that there is no evidence of plastic rice in The Gambia but they won`t listen. As a student of science, I was baffled.

As lawyers proclaimed “innocent until proven guilty”. We can also say; no judgement can be made to a sample until results are confirmed by laboratory analysis. However, as it said; every cloud has a silver lining, this episode of Gambian social media made me realize that Gambians do care about the safety of the food they consume.

Coming back to the issue of attitudinal change, as a food safety officer, I was confronted with this issue many times whilst doing my work back in Gambia.

When you suggest better alternative ways, people will always look into your eyes and say “I have been doing this for many “many” years”. Some literally mean, “since I was not born”.

However, they didn’t know it was wrong all the time. Lack of change, adaptation to new ways of doing things is one of the things making Africa lack behind.

Thus, in order to move forward, we MUST adapt to changes.

Now coming back to the main issue of this article, like all Gambians, I grew up eating my dear sandwiches wrapped in papers (mostly newspapers).

Wrapping of newspapers with our bread has become ingrained into our population so much that it would be considered an insult to sell someone bread without wrapping it in a newspaper.

One of the reasons people like these papers is that, they can absorb the oil in case of Mburi ak Myebe and the like. It is also believed to “protect” the bread from dirt after buying.

Whilst this can be accepted as a layman excuse, the destructive health effect of these newspapers is worse.

The sooner you desist from using newspaper-wrapped food, the better for your health. Evidence has confirmed that it is injurious to your health.

One of the things I found appalling among Gambians is that once you eat food, you did not feel any immediate health complications, dead, that food I considered safe.

Now come closer, I will try as much as possible to explain this in a way that you will understand.

To be honest bread (especially Tappa Lappa) production and handling safety and hygiene standards are generally low in The Gambia. However, let’s assume it is safe for public consumption.

Food inspectors require that all breads be kept in closed environment-free from physical contamination. Now the biggest safety hazard is the newspaper.

It was produced in a foreign country. From the raw paper material to the finished product, no food safety standards were observed because it was not meant for eating.

Then to the printing rooms, the machinery, the transportation condition to stores, offices, markets, to individual hands.

Some of the papers are read in libraries, dining halls, toilets etc. Either used or unused, newspapers are parked by dirty hands including heavily contaminated limbs into unhygienic containers without observance of any food safety protocol and shipped to Africa-the dumping ground.

From the unloading in our dusty roads and streets to the grounds of dirty shops, these newspapers continue to accumulate harmful bacteria, fungus and viruses.

Once a sheet of these papers is wrapped on your bread, millions of these microorganisms including pathogenic ones can cross-contaminate your food. The hands of the operator (business person) is enough a medium for cross contamination.

You might observe a sudden (or later) health problem depending on the strength of your immune system.

Secondly according to reports, the ink from newspapers is injurious to human health.

Among other things, it contains heavy metals including lead, cadmium, chromium, mercury to name a few.

Among other deleterious effects of lead, it can cause low IG levels among kids.

For instance, prior to banning of wrapping food with newspapers, A study in India found that 50% of children have high amount of lead in their blood (live your life more) in that country. The toxicity of newspapers is reported to cause other damaging effects.

Researchers have reported that newspaper ink contains compounds such as Naphthylamine, aromatic hydrocarbons, and other aryl hydrocarbon receptor agonists that have multiple negative health effects.

Naphthylamine is well known for causing bladder cancer. Studies have indicated a direct link between increased risk of lung and bladder cancer among newspaper printing workers who have been exposed to substances containing chemicals, ink and dye (Zhou, 2012).

The effects of these diseases can be severe in immunosuppressed individuals like old people and the sick as well as other groups like pregnant women and infants.

The overall detrimental effects of wrapping your food in newspapers will be long list and I don’t want to make you bored.

We should graduate from this 19th century practice and act like a modern nation.

It is even shameful as a country to import dirty papers for merely wrapping food.

The health of our people is perquisite to development.

On this note, I call on the government to BAN the importation of newspapers in our country and call for complete banning of wrapping food with all ink printed papers. Don`t tell me it will be hard.

There is always a better alternative. Some Gambians did show intentions to start paper bag manufacturing after the banning of plastic bags few years ago.

However, after 3 years of the ban, plastic bags are rampant in the country.

I was shocked when I visited Gambia last April.

Does it mean that the brutal dictator`s regime care more about our environment than the current government? I hope not.

Too many times, laws are passed but hardly enforced in The Gambia. In a country where people love for their country is merely a word of mouth, personal interest supersede national interest.

Thus, I hope all citizens will respectfully call on our leaders to act immediately and save the next generation and our environment.

I hope you will take this note as guide and start the change with yourself, your family, friends and colleagues.

Edrissa (Edie) Baldeh holds an Msc in Food Science. He is currently pursuing a PhD in Animal and Food Hygiene in Japan.