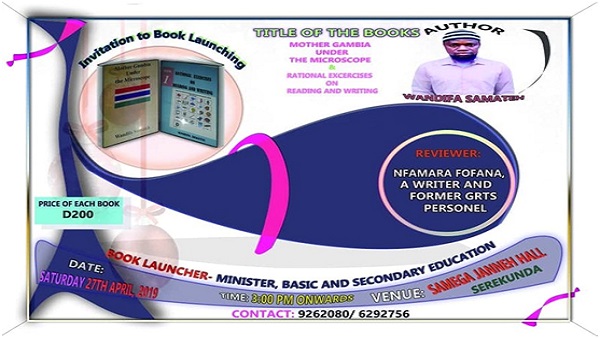 Wandifa Samateh, a university-going professional teacher has authored two books, both of which will be launched at a grand ceremony to be held at the B.O. Samega Janneh Olympic Hall in Serrekunda East on Saturday 27th April, 2019, beginning at 3pm.
The two books are titled: Mother Gambia under the Microscope and Rational Exercises on Reading and Writing respectively. Samateh, born in the Jaali Village, Kiang West District is an enterprising young author who aims to break into the growing list of Gambian writers with his maiden twin books.

In the premier book, Mother Gambia under the Microscope, the writer chronicles mother mother Gambia, on her sick bed, giving special message or advice to the President of the Republic of The Gambia, Mr. Adama Barrow as her Chief Medical Doctor on three macro viruses deterring her from development for 53 years, namely: Ineffective Educational System, Systematic Corruption, and Imbalance Equation of National Resources. From the horse’s mouth, she showed him the viruses and the recommendations for their treatment so as to avoid a third consecutive failure of governance since independence.

The Rational Exercises on Reading and Writing is an academic book brought about to compliment government’s efforts to promote early grade reading and writing abilities in Gambian schools. It is written in a more rational, entertaining and interactive style as the key motivating factor to involve children to learn easily and desirably.
The two books would be launched by the Chairman of the Independent Electoral Commission, Alhaji Alieu Momar Njie and the Minister of Basic and Secondary Education, Hon. Claudiana Cole respectively. The books are reviewed by Famara Fofana and the event is also expected to be attended by important personalities within the country as well as the diplomatic mission.

“Thus if you want to know for the first time what message or advice that The Gambia has for the following people after 53 years of speechless hospitalization; (His Excellency President Barrow as the Chief Medical Doctor, Ministers, Parliamentarians, Senior Public and Civil Servants and the Nurses and the Poor Masses as the patients, make it a date at the launching ceremony this weekend and come to the launching of the two books and have your self-copies of the books,” the Organising Committee of the Book Launching said in a statement.

“You will also get to learn how beginners can read and write. So if you are a leader or a manager and you sincerely want to solve Mother Gambia’s problem or chronic disease, come forward and get yourself a copy.”
The author, Wandifa Samateh, attended Jaali Primary School and then Latrikunda Junior Secondary School before proceeding to Gambia High School. He attended studied at The Gambia College where he attained a Primary Teacher’s Certificate. He is currently pursuing a degree from the University of The Gambia.

By Omar Bah The leader of the former ruling People's Progressive Party has condemned the increase in hate ethnic remarks in the country. “If we allow...
Read more
News

By Alagie Manneh The opposition All Peoples Party (APP) has joined the widespread condemnation of the charges against pro-democracy and human rights activist, Madi Jobarteh. Jobarteh...
Read more
- Advertisment -