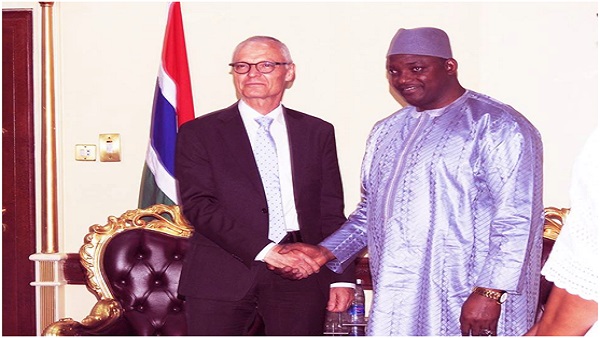 President Adama Barrow in accepting the credentials of the Ambassador of the Kingdom of Norway, Mr. Gunnar Andreas Holm, discussed humanitarian support for Gambia’s reforms, especially in the areas of prison reform programme.
“Prisons are correctional centres meant to reform offenders and rehabilitate them for integration into society,” President Barrow said, assuring the diplomat of his commitment to promoting democracy at all levels.

They touched on development cooperation between the two countries, highlighting the reforms in the judiciary, the security and the civil service.
Ambassador Andreas Holm also spoke of outstanding relations between his country and The Gambia, dating back decades of cooperation. “Norwegians have fun memories of their stay in The Gambia, not only as tourists but as businessmen,” he said.

The two leaders also discussed issues of sustainable management of fisheries. They also discussed The Gambia’s plans for increased renewable energy as Norway has a long term history of being in forefront of renewable energy solutions; increase in tourism and the potentials for such.
A research programme in Fisheries is already ongoing and a research vessel will be in Gambian waters in a few months.