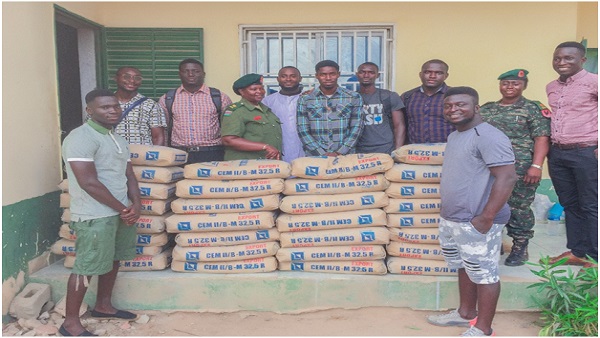 Yundum Army Barracks has received a donation from the charity Anointed Reigning Mighty Youths (Army) to construct a church in the barracks.

The Christian youth movement donated a tone of sand and 30 bags of cement to kick-start the construction.

Louis Andrew Mendy, vice president of the movement, said Army is made up of Christian youth from different parishes within the catholic diocese of Banjul.

He said the aim of Army is to foster greater understanding between youths of the diocese and help develop and actualise each other’s goals and aspirations.

He said donating the barracks to construct a church is crucial since Christians living in the area usually travel about one kilometer weekly to neigbouring Lamin’s church for prayer services.

“Therefore, we as an association think it is important to reach out to them by helping build a chapel for them.

This way they can do their morning and Sunday prayers here,” he explained.

Mendy said the movement is also engaged in other initiatives aimed at contributing towards the development of the country.

He said: “We also embark on outreach programmes to the poor and elderly as part of our efforts to spread the love of Christ. Our most popular activity is our annual football tournament.

This football tournament brings together youths from different parishes together in the spirit of mutual respect, love and harmony.”

He said this yearly tournament will this year be staged in August at the St Angustine’s Senior Secondary School’s ground.

Zindi Anthony Levi, PRO of the movement, said one integral part of Army’s activities are prayer sessions, vigils and retreats that are organised every year to engage and encourage youths to be steadfast in their worship.

Paul Arthur Gomez, chairman of Gambia Armed Forces Christian Fellowship Fund Raising Committee and chaplain Captain Fr. Joseph Gomez, both thanked Army for the gesture and said: “We expect others to follow in the footsteps of Army because this parish we are trying to build is not for us, is the house of God and is for everybody.”