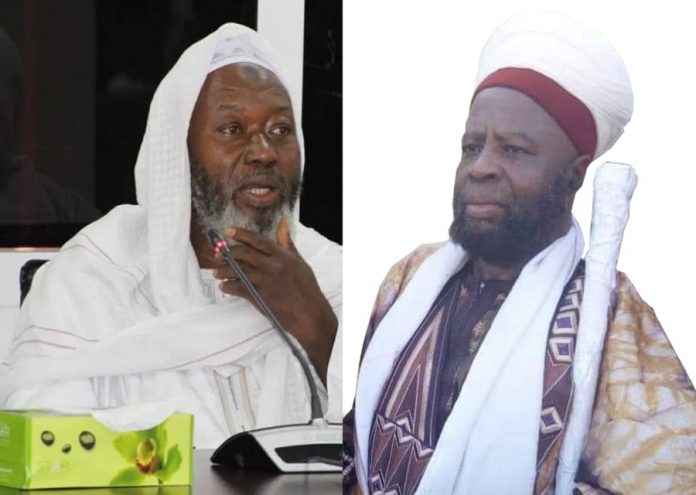 A potentially dangerous tug-of-war was narrowly averted on 27 May 2020 between surrogates of Imam Abdoulie Fatty and adversaries of the Salafist/Wahhabi movement championed by preachers like Imam Fatty, Chebbou Cham, Omar Faba Jitteh and their diehard proponents.

The imbroglio was sparked by the Mansakonko Police Station when one Ahmad Sillah of Sutukung village in Jarra was summoned for interrogation following a complaint levelled against Mr Sillah by either Imam Fatty or his disciples. The latter claimed that Mr Sillah used to systematically call him on the phone during wee hours of the night and would hurl a barrage of insults at him. Mr Sillah admitted to the accusation during the interrogation.

He however retorted by saying that his action was reciprocal to the frequent insults endured by religious leaders commonly referred to in Mandinka as “morolu”. Mr Sillah said the profane language directed at Imam Fatty was in retaliation to the same type of profanities constantly proffered by the latter and his faithful advocates. The police ordered for his detention but his escort insisted that he should be granted bail and probably be required to report back to the police station. He was eventually granted bail.

Now when news of the incident reached circles such as Rawdatul Majaalis, the latter’s adherents promptly propagated the news through WhatsApp audio messages. It is worth recalling that Rawdatul Majaalis was founded as an organization designed to serve as a bulwark against the Salafist/Wahhabi onslaught on the “morolu” of the various Majlis Kundas of The Gambia. It was therefore not surprising to see Rawda come to the rescue of Mr Sillah.

Meanwhile, the Salafist/Wahhabi camp also became involved and an exchange of diatribes over social media became rife between the two camps. It appeared that the government’s intelligence apparatus got a whiff of the heated exchanges and might have felt impending skirmishes brewing between Imam Fatty’s proponents and opponents. The government seemed to have been alerted and as a result it despatched a delegation to Sutukung to ensure reconciliation and thus stave off any potential unrest that might have been caused by the incident. It was therefore agreed that Mr Sillah travel to the Kairaba Police Station to apologize and reconcile with Imam Fatty.

The foregoing anecdote regarding the incident should serve as a wake-up call for the Gambia Government. Anger and hate are brewing under the surface, which, if not dealt with decisively, could spell disaster, may God forbid, in our society.

The Gambia during both the precolonial era and the post-colonial era has always been a haven of religious peace and harmony. Religious toleration has been the hallmark of Gambian society. Muslims, Christians and indigenous religionists have lived side by side in full respect for each other’s sensibilities. Catholics, Anglicans, Methodists and recently Pentecostal Churches have been working together and practising their rites without the slightest hitch or condemnation. Muslims likewise are not monolithic in the practice of their faith. In the Senegambia region, sects such as the Mourides, Tijans, Qadirs, Layens have never shown any sign of disagreement with or disapproval of the rituals of the other sect.

Even imported sects such as the Ahmadiyya Movement and the Jamat Tabligh (Markas) have seamlessly integrated into the society without any friction. The most recent sect or movement, so to speak, is the Salafist/Wahhabist group. They have also been tolerated to preach their brand of Islam based entirely on the Islamic concept of “bida’a and shirk”, in other words, practices and rituals perceived as innovations and acts of polytheism.

They are of the firm view that any practice or ritual that was not officiated by Prophet Muhammad (pbuh) and his Companions is either bida’a or shirk depending on the nature of the practice or ritual. For instance, religious practices such as celebration of the Prophet’s birthday anniversary locally called “gamo”, visitation of tombs of people believed to be saints, collective recitation of the Quran, collective dua’a after the five daily ritual prayers, to name just a few, are anathema and abominable to them.

The Salafist/Wahhabi sect is reputed for intolerance toward other Muslims who do not adhere to their own way of practising Islam. As a result, they have been condemning and lambasting other Muslims and go to the extent of labelling them as “kafirs” i.e. non-Muslims. They claim that the morolu are liers and sorcerers, who are committing the most awful sin in Islam. They claim that resorting to a moro or someone considered a saint for prayer is shirk; so unqualified to be regarded as a Muslim. In recent years, their preachers have escalated the anti-moro rhetoric to the level of outright insults. The Rawdatul Majaalis organization was founded in a bid to counter the anti-moro attacks. It is worth noting that the Salafists/Wahhabis held sway during the Yaya Jammeh regime because emboldened by their influence over him by dint of the religious functions attributed to them and the naïveté of Yahya Jammeh when it comes to Islamic precepts. Their influence also spilled over to the Gambia Supreme Islamic Council. They so dominated it that anything that runs counter to their own Islamic outlook is rejected outright. They even run a radio station on the premises of the Council, where only Salafist/Wahhabi rhetoric is tolerated and all other Muslim practices alien to theirs are denounced, especially practices related to Sufism, which is the predominant form of Islam in The Gambia, Senegal and throughout the Muslim world.

The Ahmad Sillah/Abdoulie Fatty incident should have been seized as a good opportunity by the Gambia Government to compel the Salafists/Wahhabis to put an end to their incendiary utterances against respected religious leaders of the country given the likelihood for such an attitude to spark religious violence in our society. However, the Government decided to brush the issue under the carpet as if the incident was a mere misunderstanding between the two individuals.

Adama Barrow and his administration should understand that the Salafist/Wahhabi movement is a time bomb waiting for an opportune moment to detonate. With the eruption of movements like Al Qa’ada, AQMI, Boko Haram, Al Shabab, ISIS on the terrorist scene, governments the world over have hearkened to the danger these groups pose to national security and the very existence of humanity. These groups’ utter disregard for human life and progress were amply demonstrated during their occupation of parts of Syria, Iraq, northern parts of Nigeria, the northern region of Mali, parts of Somalia, etc. Any government concerned about the intertwined link between security and development should take heed of the threat that such groups pose and should come up with proactive measures designed to nip it in the bud.

It would be a serious abdication of responsibility by any government that does not tackle the root cause of the violent extremism displayed by such groups in the name of Islam. The main cause is the brand of Islam I have outlined here above, which started mushrooming in our country and in the West African sub-region when our sons started receiving religious education in Saudi Arab

Countries like Mauritania, Morocco, Algeria, Tunisia, Libya and Egypt were the only destinations of the first, second and third generations of our Gambian brethren who studied in the Arab world. The foregoing countries shaped and produced for us the likes of Kawsu Gassama commonly known as Kawsu Fass because he studied in the citadel of Islamic knowledge, Fez in Morocco. He was with another pioneer called Kammo Sillah of Dippa Kunda. Then came the second wave of Arabic scholars such as Batuwo Sillah, Baba Drammeh, Banding Drammeh, Hatab Bojang, Omar Jah Senior, Mass Jah, Saja Fatty, Kebba Jagne, Sambou Gassama, etc. This crop of Arabic/Islamic scholars was followed by my generation composed of people like Masohna Kah, Kebba Landing Sanyang, Mangum Ceesay, Massamba Jagne, the late Pa Njie, former Imam of Pipeline Mosque, etc.

These people, having settled down in The Gambia, did not preach extremism and radicalism. They were imbued with the virtues of moderation and respect for local religious elders. It is of moment to make such a distinction because the countries where they studied adhere like ours in West Africa to the Maliki school of Islamic jurisprudence and Sufism.

It was only in the early eighties that Gambian students started heading to Saudi Arabia for Arabic/Islamic studies. The only school allowed to flourish in the country is the Hanbali school blended with a theological doctrine they refer to as Aqeedat Ahlut Tawhid or Ahlus Sunna Wal Jama’a. The latter appellation, however, predated their movement by over a millennium. They stealthily claim ownership of the title although the title has been used throughout Islamic history to distinguish Sunni Muslims from Shiite Muslims. The Salafists/Wahhabis instead use it to differentiate themselves from the rest of the Sunni Muslim world. The word Jama’a means “majority” i.e. the Sunnis form the majority of Muslims compared to the Shiites. Ironically, the Salafists/Wahhabis use it even though they are a tiny minority among Sunni Muslims.

The weird thing about the Salafists/Wahhabis is the concentration of their preaching effort and energy on their fellow Muslims who do not espouse their own Islamic outlook. They are the least bordered by people of other faiths. Instead of striving to get other religionists, especially the heathen among us in The Gambia, Casamance and Guinea Bissau, they prefer to convert their fellow Muslims to their own brand of Islam because, in their view, such Muslims are misguided like the heathen. Consequently, they deserve to be the object of their missionary work instead of the non-Muslim who knows nothing about Islam. This approach makes their motives appear dubious to other Muslims. The famous preacher, Bakawsu Fofana indicated recently that the Salafist/Wahhabi movement’s prime objective is to impose their worldview on others. They befriend governments not because they are loyal to the latter but their ultimate objective is to wrest power from governments and then impose the Sharia as they perceive it.

The Gambia Government should therefore see the Salafists/Wahhabis as a threat to national security and social harmony. It is even being claimed in some informed quarters that their adherents receive training in martial arts in secret locations in The Gambia. Gambia Government, please wake up and take heed before it is too late!