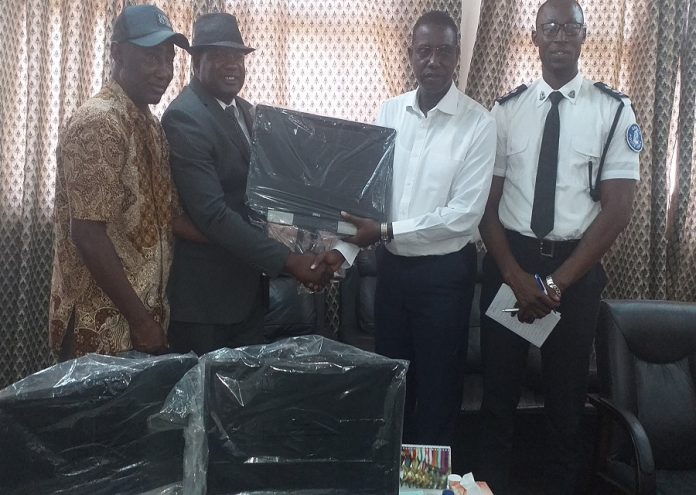 GACH Global on Thursday donated over 200,000 dalasi worth of items to the Anti-Crime Unite at a ceremony held at the Police headquarters in Banjul.
Items donated included 3 brand new Dell computer sets, a printer and one big box of A4 side paper.

Speaking, Bubacarr Jawara, Chief Executive Officer (CEO) of GACH Global, described his relationship with the anti-crime unit and the police at large as a historic one.
“My relationship with the police does not start today; we have been with them since 2008. That is why when they approached me for help, I responded as soon as possible,” he said.
CEO Jawara said the police protect the welfare of citizens and there cannot be a proper development without the help of the securities.

He said the items are meant to make the work of the anti-crime unit easy since they are always dealing with people which, he said, is not easy but the items will help them deliver effectively.

Samba Jawo, Security Director of GACH Global, said CEO Jawara has been doing such for quite a long time now but he never wants these good gestures to be revealed.
According to Jawo, Jawara is currently into borehole projects in Sanyang. He said they have more plans in the pipeline.

Abdoulie Sanyang, Deputy Inspector General of Police, thanked Jawara and his team for such a laudable effort, and his tireless support in making their work easy.
“This is not the first time for Jawara to give a helping hand to the police department,” he highlighted.

He said the development of the country lies in the hands of the securities.
Other speakers included ASP LaminNjie, Public Relations Officer of the Gambia Police Force.