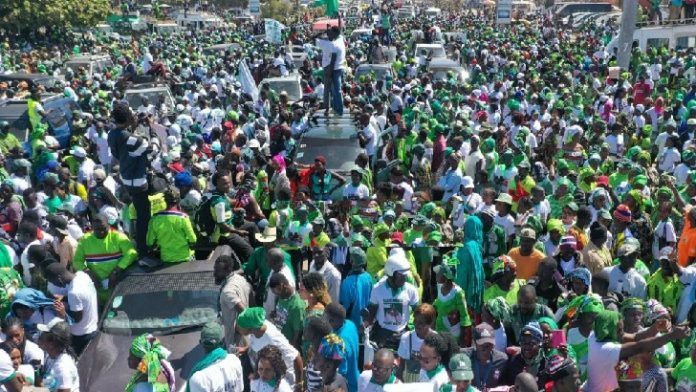 The opposition Alliance for Patriotic Reorientation and Construction (APRC) has yesterday laid its case before the United Nations, Ecowas, and AU, through their offices in Banjul, demanding the implementation of the crisis-resolving agreement they made that ensured the departure into exile of ex-president Yahya Jammeh in 2017.
The APRC had said this declaration, which was hailed by all stakeholders at the time and transparently published even on the UN website, provides for Mr Jammeh to return to his country among other things.

APRC said they have made several previous engagements with the various stakeholders involved in the joint declaration but no significant progress has been made, hence the need for a procession to make a public call for its implementation.
Backed by tens of thousands of supporters, the party interim leader Fabakary Tombong Jatta and senior officials led a procession from Sukuta-Jabang road to the offices of the AU in Bijilo.

They hoisted the Gambian and APRC flags on placards reading: “Babili Mansa must come back, Ecowas, UN, and AU implement joint Declaration Now”.
Countless others denounced the TRRC process, calling it a smear campaign while others accused the Barrow government of negating on an agreement made with Jammeh.
Basirou Cham, a supporter said the Gambia government is the biggest beneficiary of the agreement with Jammeh because it allowed them to settle down.
“I wonder why they are denying the existence of such an agreement between them. Are they afraid of Jammeh? The former President deserves to be back as has been agreed,” he said.

Eliman Manneh, another supporter who constantly blew his Gambia-flag drabbed Vuvuzela, said the protest march is a manifestation that the APRC is still alive and kicking. “They have done everything to suppress and scare us but they have failed. Our mission today is to demand justice for Yahya Jammeh. His right to come home must be respected. He has done a lot for this country and does not deserve to be banished from here,” he added.

Dodou Jah, the deputy party spokesman said the international community should take the joint declaration that ended the political crisis in the Gambia seriously because it can judge their credibility in future crises elsewhere. ”We are not making any demand; we are simply calling on the UN, AU and Ecowas to implement what they themselves have negotiated. And in any case, there is no law which says someone should be banished from their country no matter what he or she might have been accused of,” Jah said.

The interim leader, Fabakary Tombong Jatta while presenting the reminder to the AU, told journalists that the day was significant as it will make the international community, especially those involved in the Gambian political crisis of 2017, to take notice and be reminded about their roles and responsibilities.

“We had written to them earlier and they acknowledged receipt of it and agreed to receive the letter from us for onward transmission to the Chairperson of the AU Commission. It is simply to remind them that the declaration had provided for Jammeh to come back at any time of his wish. So as I have said, we are an opposition with a difference as we do not believe in violence or force and we respect people’s beliefs and thoughts even where we disagree with them. So we too expect people to respect our beliefs and views even if they disagree with us. There are also forces in the country not respecting our rights as a party and Gambians but we respect their views as our principle is tolerance for one another,” he said.

Mr Jatta thanked the Gambia government and the Inspector General of Police for issuing the APRC a permit to hold the procession.
He also used the occasion to criticise the European Union for meddling in the internal affairs of the country. Meanwhile, the Victim Center has also applied for a permit to held a counter demonstration later this month.
Additional reporting by Mafugie Ceesay