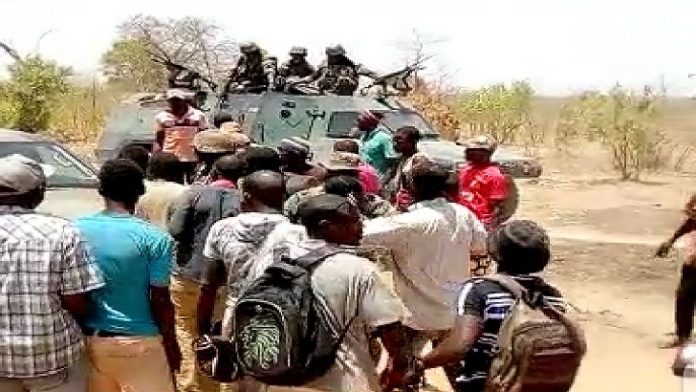 The spokesperson of the Gambia Armed Forces, Major Lamin Sanyang yesterday confirmed that some Senegalese soldiers entered the country, but they did so by mistake.
Videos of chaotic scenes emerged on social media yesterday showing Senegalese troops exchanging words with Gambians in the border village of Sarreh Omar.

Explaining the incident, the Army PRO Sanyang said: “This morning {Thursday} the Gambia Armed Forces got information from social media and other sources that Senegalese troops entered the country at a village in LRR. We immediately instructed the commanding officer at the 2 Infantry Battalion in Farafenni, Lieutenant Colonel Timothy Sanyang to investigate and get back to us on what really happened at Sarreh Omar.”

PRO Sanyang said during the course of their interaction with the community, they got information that Senegalese armed forces personnel in three pickups and one Armoured Personnel Carrier with about 20-30 personnel crossed the border to Sarreh Omar claiming to be on a routine patrol. “But when the villagers told them they were in Gambian territory, they (Senegalese armed forces personnel) told them they were lost and found themselves in the village,” he said.

PRO Sanyang however clarified that the recent incident has “no connection with the agreement the Gambia has signed with the Senegalese government sometime in 2017”.
In March, Senegalese gendarmerie stormed into The Gambia and took away a Gambian after shooting him. Also last year, a fracas erupted between Gambia and Senegalese troops in Darsilameh when soldiers from Senegal attempted to enter the country.