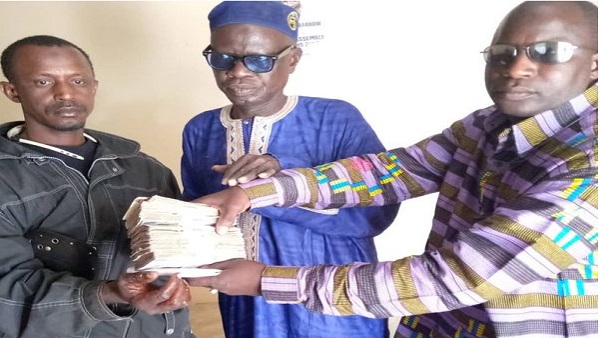 The United Kiang Association over the weekend donated D200, 000 worth of materials to health care centres in Kolior and Kaiaf, both in the Kiang east district.
The monies, D100,000 each centre, went into building materials for extension of facilities at the health posts in the two villages to complement government efforts.
The items purchased from the monies include 7 trips of gravel, 30 trips of sand, 109 bags of cement, 130 pieces of iron rods, binding wires and even computers to Kaiaf Upper and Senior Secondary School.

The United Kiang Association Association was formed in 2017, by the people of Kiang East mainly living abroad who came together to raise funds including concerts with Jaliba Kuyateh to sponsor development projects in their community.

Speaking at both presentations Lamin Manneh, assistant secretary of the United Kiang Association, said: “The donations followed a need assessment conducted through consultations with the communities after which it was discovered a maternity wing is needed in both Kolior and Kaiaf hence the twin donations today. To be specific, we funding the fencing of Kolior health centre and extension of buildings at Kaiaf health centre.”

Manneh further disclosed that in the recent past the association helped disaster victims in Jasobo, Gennier ,Njolofeng and Kaiaf all in Kiang East spending over D700 as well as a further D27,000 to Kaif Upper and Senior Secondary school.
Landing Sanneh, chairman of Mansakonko Area Council commended the Association saying their contribution is improving education and health which are very important in the life of a country.

Sutayring Drammeh, regional health director commended the association and added that come April government will take over the management of Kolior Health Centre.
Jammeh Sillah, Officer in-Charge Kaiaf Health Centre and who also oversees Kiang East and some parts of Jarra West commended the Association for the great intervention.
He thanked United Kiang East Association for their generosity, and urged others to emulate the association.

BubacarrManka, president of the association highlighted the achievements and challenges facing their association “We have achieved alot because in the education sector because we were able to increase the performance of the students of Kaiaf Upper and Senior Secondary School and disaster victims. Other Speakers included Hon YahyaGassama, NAM for Kiang East, Chief KarangAnsumanaSanneh, Musa SamuraAlkalo of Kolior andChernoSanneh, Akalo of Kaiaf and others.