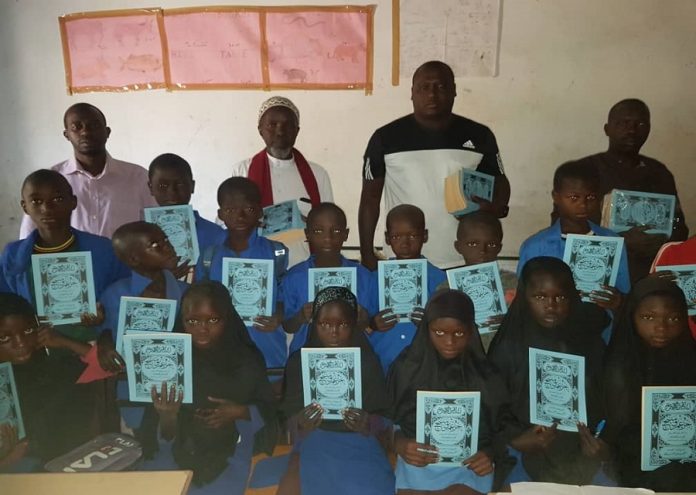 The Omar Islamic Support Foundation (OISF) of Gambia Under 23 football coach Omar Ceesay on Sunday donated large consignment of Qur’an cpoies to the Maulud Al Huusary School at Kiti in the Kombo Central district.
The items were presented to the pupils directly in their classrooms which excited both teachers and pupils.

The children read the versus from the Qur’an to greet the foundation founder and officials who presented the books.
Mr Ceesay said the donation was the latest among a series conducted in Lamin town and other places adding that he will continue as the foundation expands.

Mr Mafugie Kujabie, the deputy headmaster of the beneficiary school commended the foundation and explained that the donation will help the pupils with more reading materials and reference books to enhance their education.

Another member of staff welcomed the foundation members and encouraged them to consider extending more support to the school which has an enrolment of 288.
The OISF founder Omar Ceesay himself a product of a strongly Islamic cultured family in Kiang Keneba, said he is impressed with the commitment of the teachers at the school who operate under very limited resources to educate the children in Islamic education and culture.
Mr Ceesay was accompanied by Lamin Ceesay, an official of another charity.