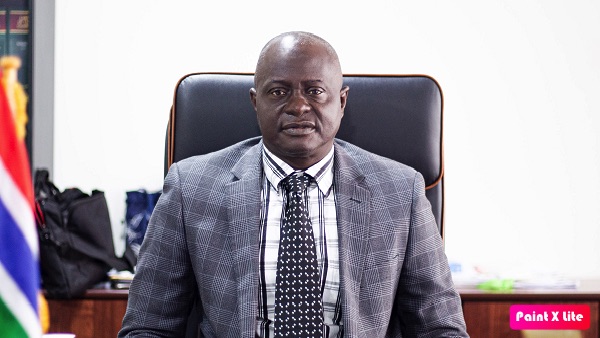 The Auditor General has lamented  government’s inaction to enforce his department’s audit recommendations.

Karamba Touray made these complaints at a meeting organised online to discuss the US State Department’s Fiscal Transparency Report 2020 on The Gambia.

The U.S State Department Fiscal Transparency Report 2020, has indicated that the National Audit Office which is the Supreme Audit Institution (SAI) of The Gambia does not publish audit reports of government accounts on time.

But in his explanation during the video conference, also attended by The Standard, the Auditor General said his office has for the past three years produced eight audit reports which were shared with the National Assembly and the Gambia Police Force but no actions were taken.

“Very good reports on waste management and electricity generation in the Greater Banjul Area, effects of aids countrywide, the passport saga and Semlex were produced but not much has not been done,” he said.

He said the constitution empowers the Auditor General to make audit reports public if the police or National Assembly fails to act on them.

“But the ultimate objective is not just to publish these reports but they should have impact on the lives of the citizenry and that can only happen when the executive implements our recommendations,” he added.

He said they currently have two un-discussed financial statements of the government with the National Assembly.

“The Auditor General is permitted by law to surcharge but it is not clearly spelt out how that should be done,” he said.

He also informed the meeting that his office will soon begin auditing the Covid-19 funds and the issues of monies paid to frontline workers will be in the center of their findings.

Turning to the function of NAO, Touray said the National Audit Office from 1997 to 2016 was functioning as a government department despite continuous engagement with the government to allow the office to be independent.

He argued that section 151 subsection 3 of the Constitution required the Auditor General to check and verify before any money is expended to satisfy whether it is appropriate or not.

“But all these years up to today, this is done by the Ministry of Finance,” he said.

In response to the queries made by the Auditor General while speaking on factors responsible for the delay in submitting government audited accounts to the National Audit, the Accountant General Momodou Lamin Bah said the government is faced with capacity constraints.

He said a lot has to be done to improve the quality of government accounts submitted to the Auditor General.

“Fiscal transparency fosters greater governance and accountability by providing a window in the government budget and helping citizens to hold their leaders accountable and facilitating better informed public debate. It is only through transparent fiscal action of management of a country’s public resources by their governments that public trust can be gained,” he added.

He said The Gambia is “no stranger to the lack of transparency and accountability as Gambians themselves have demanded the ballot box change and are themselves advancing a review of what went wrong in the previous administration and that led such abuses of public trust.”

Ambassador Paschal said despite public corruption being one of the leading concerns of Gambians and the fact that it is happening, “corrupt public officials are not charged for public corruption.

He said although there are some shortcomings, progress has been made in some cases such as the passport saga, with identified culprits currently on trial.

Mbowe said the Auditor General should use his powers to surcharge and recover monies from corrupt individuals.

The meeting discussed the FT 2020 Report and what it means for The Gambia’s accountability and transparency institutions such as the National Assembly, Accountant General’s Department, and National Audit Office (NAO).