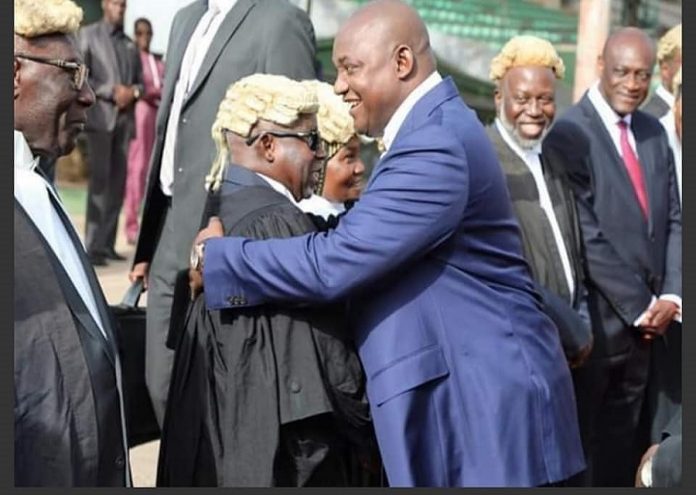 A spectacular handshake and a warm hug between Ousainu Darboe and President Barrow at yesterday’s legal year celebrations have left both men’s supporters breathing a sigh of hope and relief from a period of tension.

Onlookers at the ceremony described an emotional minute or two when the President and Mr Darboe embraced as he reached him in the queue of legal luminaries and guests at the ceremony. Watched by visibly elated bystanders, Barrow gripped and hugged Darboe with warmth and excitement.

The two men have never met since they parted ways over a year ago after Barrow sacked Darboe, his political godfather in a cabinet reshuffle against a background of heightened political difference between the two who both once belonged to the United Democratic Party which Darboe led from 1996.

Mr Darboe was sent to prison for holding an ‘illegal’ procession when he protested against the killing of his party youth official Solo Sandeng. Mr Barrow and several others who were lucky being deputy executive members exempted from the protest march, survived the mass arrest of the UDP top brass. Mr Barrow was subsequently made flagbearer of the party and went on to win a convention of opposition alliance that sponsored him to defeat strong man Yahya Jammeh.

Mr Barrow yanked Darboe and others from Jammeh’s prisons and appointed him Minister and later vice president.
But the two fell out a little later after what observers believed was a clash of ambition between the two.

Barrow went ahead to form his party, the National People’s Party severing any relationship with his native UDP. Mr Darboe meanwhile continues to rally his troops in the UDP for a possible show down with his former protégé in the 2021 election.
Yesterday’s handshake is seen by many as a welcome sign of both men’s desire to ease tensions between two groups which used to mainly be one and the same.