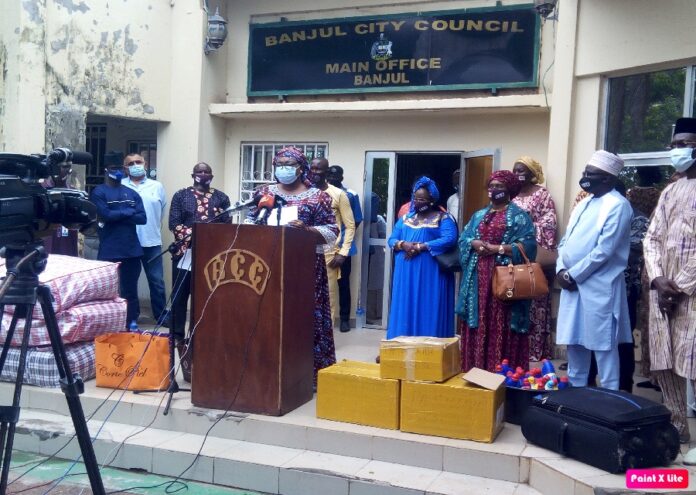 In a boost to the Operation 100′ 000 Masks Initiative, the Mayor of Banjul City Council, Rohey Malick Lowe, has recently updated the press on the progress of the mask initiative, saying over 34, 100 masks have been received from different people, which represents 34.1% in 21 days.

It could be recalled that Mayor Lowe on 13th August, 2020 launched the operation 100, 000 face marks initiative, calling on Gambians both home and in the Diaspora to join her and take up this challenge.

“I want to take this opportunity and call on all to put aside our differences whether political or otherwise and save our nation as I intend, with your support, to provide 100, 000 face masks for our needy Gambians,” she said.

Briefing the press, Mayor Lowe expressed appreciation to all those who in one way or the other contributed to the success of the initiative.

She thanked everyone who contributed to make this initiative a success.

“People have come in their large numbers to show solidarity with the 100, 000 masks initiative and this is not only for Banjul but is for the Gambians,” she said

She further named the people who contributed to the Initiative, among is the Mayor of Dakar who contributed 25, 000 masks, National Council for Civic Education (NCCE) also donated 25 masks plus other organisations.

“These people deserve to be named and of course, I thank them always. People should not think what the country is doing for them, but they should think what can I do for my country,” she highlighted.

“Anyone who contributed to the Initiative, you should know that you did the right thing, and you did it for your parents, family and children and Gambians,” she stated.

“My Council is transparent, that’s why whatever we are doing we make sure the media is present.”

Also speaking, Sering Faye, the Chairman of NCCE, said this is their third time visiting the BCC.

He said the NCCE will not only participate in donating face masks but will also participate in sensitisation campaigns in raising awareness of this deadly pandemic and how one can also prevent him or herself.