Ecomig and extensions of stay: Why and how we get here 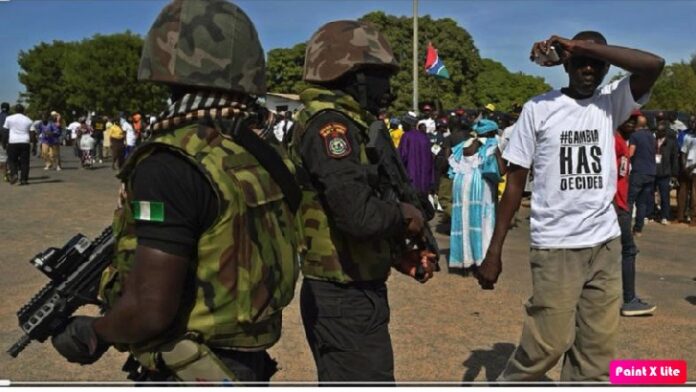 When the country emerged from 22 years of authoritarian rule and post 2016 Elections impasse, indeed there were a lot of Security vulnerabilities, security risks and perceived threats particularly from within and definitely not from outside – an invading force. So, this should have been an anticipated national challenge for our newfound dispensation, needing a comprehensive plan to address the emergency, right from when the new government took over. I think this should have precisely triggered the government to start from basics/ground zero, by documenting an understanding of what the security risk/threats were, confirming them – through diligent investigations/Board of Inquiry – what, how and where these threats/risks/vulnerabilities are and; use these findings to “arresting” the apparent security challenge, and in turn spearhead a wider reforms, specifically including an urgent, comprehensive and committed Security Sector Reforms. This should be the right direction to put us where our hearts and aspirations were; in consonance with the fact that no country want foreign troops on her soil for the simple reason that it tends to denigrates national sovereignty, hurts national pride/esteem and impacts our ability to “stand tall” in the community of nations. These mis-steps and failures, at the unset, are part of the reasons why we continue to extend the stay of ECOMIG.

I will hasten to speak for the country, least we, as a nation, be perceived/quoted wrongly; The Gambia and overwhelming majority of Gambians are appreciative and will continue to be forever indebted to all foreign troops and nations of ECOWAS including indeed our neighbours – the Republic of Senegal – for coming to our aid, at the time they did. ECOWAS, AU, EU UNDP and all other donors, bankrolling and supporting ECOMIGs stay, in one form or the other, have been consistent in doing whatever they could. The Gambia salutes them as worthy partners.

The above notwithstanding, the country cannot afford to outsource this most important pillar of national development – its national security, to foreign troops, longer than necessary but instead must quickly (and again with the solid commitment, urgency and political will required to pick ourselves up) mobilize the required resources (quality human resource, materials/equipment and finances) and invest it on the trajectory that will make foreign troops remain on our soil, in the shortest possible time.

Such a measure would have avail us the opportunity to do a quick and incisive short to medium term restructuring, downsizing and indeed resizing of the security services. The strategic end result, in this quick and incisive exercise being, to enable us quickly get back with our nation’s security forces and be able to reassure and demonstrate, to our citizenry, as well as, the community of nations, that our security services are able to take care of the security of their country. In the process this will also enhance and contribute towards the greater efforts at national closure and moving forward.

Yes, it is a given to assume that this is a monumental task to achieve but with the human capital/resource already available both within and outside the Gambia, the fresh breath of hope in the Gambian people and the goodwill of our international partners, it is within reason to believe that the only critical elements required are selfless leadership and consistent commitment to the collective national interest, motivated by the awareness that this pathway will be difficult, reward-less and overly unpopular. In my opinion, the Gambia post 2016/17 Impasse is yet to see such commitment, focus and urgency, on this most important undertaking of moving our country from the abyss of the impasse, towards a steady keel for national development. It is without doubt, that our security challenges post 2016, cannot be solved by an exercise of perpetual extension of foreign troops stay.

But what pathway did we chose? Where are we?

Again, it is my considered opinion, based on my career background and training, that the dilemma the country/government is facing, by having to extend ECOMIG stay always, is partly self-inflicted due largely to inconsistencies in our security sector reforms. The reason being that at every national security platform, what becomes apparent is the efforts at trying, very hard, to avoid addressing “the elephant in the room” i.e the unwillingness to look at our national security challenges from within and or the unwillingness to learn from what our national security history has documented.

It is therefore time to collectively learn from our national experience and   resolve and dare        to espouse a national aspiration for what we  want  our  security  to be, moving forward, based on  our    national security interest and values.

Why should it be so difficult to recognize that anytime we have been faced with security challenges of the proportion of post 2016/17 post election Impasse, it stems from our security services, anyhow one looks at it? For instance the 2016/17 post election Impasse was particularly a stand off between the security services and the rest of the country; the intimidations, abuse and killings/disappearances meted out on Gambians for almost 20years of the second republic, has been the emboldening of a dictator who succeeded in undermining and misusing the security services (and personnel thereof) for his personal/selfish political agenda; the 1994 coup d’etat where the security services misuse the trust of the people to subvert the wishes of the very people who entrusted their security in their hands ( as well as, the subsequent coups throughout the Second Republic, perceived or otherwise); the 1981 botched coup d’etat of Kukoi Samba Sanyang, who had the support/was abetted by the then paramilitary forces. That no matter how much light shines from the lamp pole, if what you looking for is dropped elsewhere, you will never find it, is a relevant truism.

Again in my considered opinion, the core to the security reforms should begin by making the recognition of our national security history, use the lessons learnt and collectively redesigned our security proposition and posture, looking inwards and most importantly, grounding it on our national Values, Interests, Power (with emphasis on where our strength lies i.e “Soft” Power) and national Aspirations.

The Gambia has throughout its history been recognized as a bastion of peace and democratic values. A “Soft Power” dynamics this country has nurtured and exported to all corners of the worlds. The security services have indeed contributed immensely towards our national soft power over the years, through international Peace Keeping missions. And in the process carved out a solid professional reputation/commendations for themselves and the country in general. And probably one of the only references of the security services, both men and women in uniform, as well as, the country has ever been and will always be proud of.

Furthermore, it is about time that we embrace this gift of God who, in His infinite wisdom, endowed us with a country whose borders are ring fenced by another country, on all sides (yes even on the east, for if a country has, superiority in speed/access from land, sea and air; resources and sophistication, it is in reality the one who covers it). Our security threat is overwhelmingly unlikely to be external, particularly in this 21st century of global/international and continental checks, balances and accountability frameworks.

Deepening the embrace of this gift of God, we must endevour to go back to the drawing board, craft, negotiate and agree with our neighbours, the sister Republic of Senegal in particular, who we are conjoined to share a common security destiny, as independent sovereign nations. This be tabled under the protocols of the Senegalo-Gambia agreements and any other relevant bilateral, witnessed and guaranteed by the ECOWAS and AU as well as endorsed by the UN. This will give comfort to both states but particularly the Gambia, including the space, time and resources to concentrate on developing the Security Service architecture and mandate, its training and resourcing.

Our problem has demonstratively been internal and we have to be bold enough to deal with it from this perspective. The sooner we start, with the requisite leadership – at all levels, the attendant commitment, political will and urgency, the quicker we will put an end to this costly and unnecessary cycle of ECOMIG extension. There is necessarily the need to rebuild a new Armed Forces in particular and Security Services in general by whittling down the current size to a bare 30-25 percent. This is indeed for various valid reasons. For instance those who cannot pass the set fitness test for service; not fit for health reasons; anyone recruited fraudulently/illegally; perpetrators of abuse/atrocities leading to death or disappearance of individuals; close associates of former president, those who opt for voluntary retirement, etc. Another important reason has to do with what has become the mindset and culture of security service during the second republic. Once this is achieved we rebuild to a Brigade level Armed Forces, whose primary mandate will be Peace Keeping Missions while ceremonial duties and aiding in internal security as secondary mission.

But this apparently is a normal exercise of security services around the world, it seems, has become a taboo across the defence and security establishment in the Gambia for whatever reason. This is Primarily for what I consider to be an inherent lack of clarity, circumspection and effective, all- stakeholder communication in our current security sector reforms strategy.

We must be resolute however that such a probable downsizing exercise can only be successful, if conducted in an atmosphere of reinforcing national closure, justice and healing. One embedded also in an overarching reform strategy that encompasses re-skilling, retraining, resettlement and funding/financing of ventures for all those eligible/affected by the security service downsizing exercise.

Finally, it is common knowledge that because most in the security service, across all levels/echelons may become affected by this reform strategy implementation exercise, it is only reasonable that the security services cannot lead or allowed the prerogative to advice/influence its outcome, for probable conflict of interest. The nascent democratic dispensation of the Gambia, for which the security services has played a major role, will continue to call for duty and sacrifices, as it has always called upon her sons and daughters in uniform. The Gambia expects nothing less. For this is critically urgent, among other things, to solve our own security challenges, by our very own men and women in uniform, and not through perpetual stay extension of foreign troops on our soil.

We have wasted four years in which the core direction of this country should have been reforms, reorganization, restructuring, re-calibration, redirection and nothing else. This is the embodiment of a nation in transition, particularly one with the Gambia’s decades long experience. This national trajectory should not have been conflicted with or allowed the distraction of party politics and or self-perpetuation/interest.

We must go back to work! For the Gambia our homeland!

Fmr Minister of the Interior