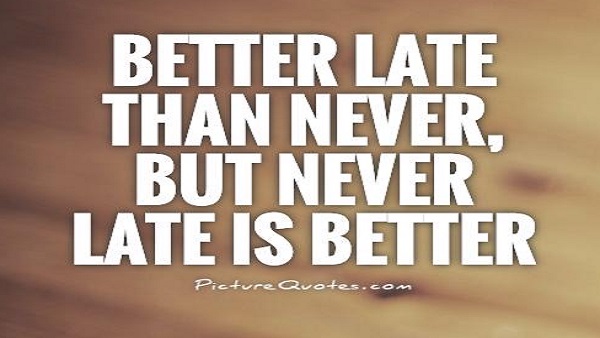 That is something we say when we try to avoid conflicts about our procrastination.
An essay that should have been ready one week ago? Better late than never we say with our cheeks flushed by embarrassment.
Parking the car at some unconvenient place and not moving it until the police is standing there, giving you the ”death stare”?

Better late than never you say, jump in and drive away as fast as possible.
These situations are not that serious as the ones the citizens of The Gambia are living under. If you are waiting for a salary that has been delayed it is of no comfort to hear: better late than never. Knowing that you need to pay for cash power, rent and fish money every day gives you stress when your pockets begin to be empty. You can’t afford to wait, but your employer knows that you have no option but to wait. You can’t protest because you fear to lose your job.

Better late than never doesn’t apply on the current situation of The Gambia. So much is too late already and it will be hard to turn things around and make it better. We should turn the expression around a bit and say: Late is never better. Our rulers seem to fail understanding that their delay and empty promises are draining the citizens on their energy and hope for the future. There is a new election at the end of 2021, how many will survive until then? Is that the strategy perhaps? That not enough people have energy enough to drag their starved bodies to the election? Is there a strategy that people will finally be too passive to care about the outcome of the election? Why should they bother? Has anything changed for the better yet?

Let us be fair; people are not dragged out of their houses in the middle of the night, killed and thrown into empty wells. People can demonstrate and don’t have to fear for their lives, only the pain when they are hit by batons. Yes, I know that there are exceptions, people have been killed, but it is no longer the norm.

Journalists don’t have to fear to be severely punished when they criticize the president and/or the government. That is a huge step in the right direction, but the steps into a greater future for The Gambia are too few and the pace is too slow.

Recently I read an article where the minister of tourism, Hamat Bah, promised that he and other members of the government are looking at how to help those who have businesses in the tourism sector. He didn’t want to say what they were going to do, only that they are discussing the matter. I tell you that a dead snail is moving faster than these people! Look back at the first blow on the tourism sector: September 23 we got the first message that the world’s largest travel agency Thomas Cook was bankrupt.

It is 7.5 months ago! Nothing has happened since then to help all the companies, large or small, who depend on tourism. Minister Bah, do you know that groundnuts and tourism are the two largest sectors for the Gambian GDP?
I am a toubab, living in Sweden, but still I know that if you don’t speed up and help this large and important sector you are cutting off one of the legs the Gambian finances are standing on.

You held a meeting with the GTB and a lot of representatives from the tourism sector shortly after the Thomas Cook bankrupcy. You promised to take action and help the businesses so they could survive. This is 7 months ago, sir, and nothing has happened since then.

Poor Gambia, you have been suffering for so long! You have been colonialized, you have been oppressed by a mad dictator, you were struck by the fear of ebola, then the Thomas Cook bankrupcy and now Covid-19.

Once again minister Hamat Bah promised to take action and my question is: will it take another 7.5 months before we hear from you again? The only thing you have given us this far are empty promises and no one trusts you anymore. It doesn’t matter how many photos you will have taken by your empty desk, because the surface on that is as empty as the words you are speaking. How come you got this position? Is it because you are a childhood friend of the president? You don’t seem to have any qualifications considering the quality of your work. Are you lacking ideas? Well, call me and I will help you, my head is always full of them. You see, no one knows everything, but we can learn from each other. Don’t let your prestige stop you, there is no shame in telling that you don’t know certain matters. You have already embarrassed yourself by your incompetence, so how can it become worse?

Better late than never seems to be the slogan you are living by. The problem is that this slogan can’t be applied on everything and especially not on something that affects others’ livelihoods.

Our businesses in The Gambia are struggling more than ever, the threat of bankrupcy hangs over them like a dark cloud. It is cruel to promise something without the intention to keep your promises. I’m sure it is not your intention to be cruel, you just act the traditional way as most Gambians with authority do. You give a promise with your fingers crossed behind your back. You don’t have any intention to speed up any process at all, you just want to get rid of the person who is asking the uncomfortable questions. When that person comes back to hold you to your promises, you either give new promises or get upset and refuse to give an answer.

Better late than never – tell that to the mother who is boiling water in the evening. She is pretending to cook supper for her kids, but she is actually hoping that they will fall asleep before they realize that there is no food in the pot.

Better late than never – that is what those who made crafts to sell at the market for the tourists have to tell those who lend them money for the material. No tourists means no income, no income means nothing to support your family with. Still the tourist season is too short, nothing has happened to extend that despite the great possibilities. The Gambia is a country for all-year-round tourism, not many countries are. Right now we have to deal with the coronavirus pandemic, but we must plan for the future.

Poor people live from hand to mouth, the little income they have will be consumed directly. So many are depending on tourism and they have nothing at the moment. How long are they able to wait before the government completes their discussions?

Poor people live hand to mouth, because they have no option. A government must have a longterm plan for the country. Some immediate actions can and must be done to help the citizens, in the meantime you also make plans for the future. A government that lives/acts hand to mouth is a shame. Your new slogan should be: Never be late!