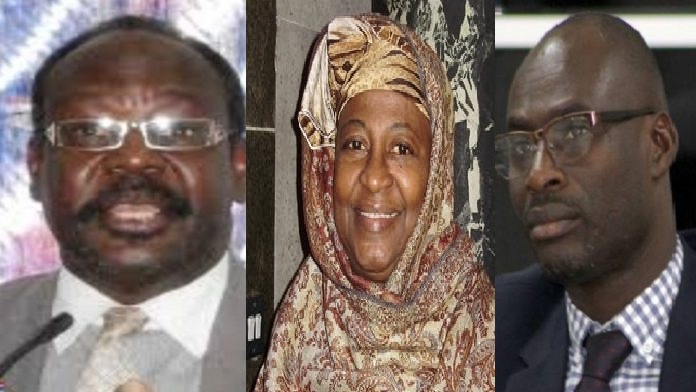 I was going through my computer inbox recently, in search of a very important document, that was electronically dispatched to me. It was then, that I accidentally came across, your kind and well-worded official letter of profound thanks and appreciation to me, dated 17th December, 2019, in connection with the above-stated subject matter, of paramount importance. A photocopy of the aforesaid self-explanatory missive, is attached hereto as “Exhibit A”, for ease ofreference, and it is indeed “res ipsa loquitor” (latin: ie the thing speaks for itself).

Let me first of all, apologize to you profusely Honourable Madam/Mrs. Adelaide Sosseh, for my belated and inadvertent response, to your aforesaid very important letter. “Better late than never”, as the famous adage goes.

I can fully recapitulate, my active participation at the aforesaid Experts’ Meeting, under your able and dynamic Chairpersonship, and the other members of the high table were: His Honour DR. Lamin J. Sise, a senior Cambridge-trained Jurist, &the Chairman of the TRRC, His Excellency Professor Amos Sawyer, a former President of Liberia, the Deputy Honourable Attorney General of South Africa, and my humble self, as the representative of The Gambia’s Honourable Attorney General & Minister of Justice. I believe I made a laconic speech, during the official opening ceremony, at the Kairaba Beach Hotel, on 9th December, 2019. Ms. Aji Adam Ceesay, one of my brilliant former L.L.B. degree students, at the Faculty of Law of the University of The Gambia (U.T.G.), now my learned iunior and a Senior State Counsel at the Ministry of Justice, ably represented the said Ministry, at this historical and high-profile Experts’ Meeting.

Thanks for letting me know, that in your esteemed opinion, I “……..ably represented the Honourable Minister at this very important event, and your invaluable legal inputs and insights at the Plenary Sessions, were wholly constructive and extremely enriching, and contributed to the attainment of the Workshop objectives, which was organized by The Africa and West Asia Programme of International- I.D.E.A. (A.W.A., I.D.E.A.), within the framework of its Technical Assistance to the Transitional Justice and Institutional Reform Processes in The Gambia……………”

As a senior Gambian Human Rights Lawyer, I strongly subscribe to the incontrovertible view, that the transitional justice and institutional reform processes in The Gambia, which have been put in place, shortly after His Excellency, President Adama Barrow, was sworn into Office, as the third President of the Republic of The Gambia, (ie The Janneh Commission, (which has already successfully investigated the financial activities, of ex-President Yahya Jammeh), the Constitutional Review Commission- CRC. (which was mandated to draw up a new National Constitution, for The Gambia), the present or ongoing TRRC, (which has been mandated by The TRRC Act-2017, to investigate all human rights violations, that occurred in The Gambia, from July, 1994 to January, 2017, and to consider reparations, in appropriate Cases…..), our National Security Reform Programs (that are ongoing, and meant to reform The Gambia’s Security Sector) etc.

All of these reflect international best practice, they are very timely, and they are the precursor to the proclamation of “The Gambia’s 3rd Republic”, under the visionary and dynamic leadership of, His Excellency President Adama Barrow. The aforesaid National Reform Programs, are very important, and this fully elucidates, why the United Nations, and other bilateral and multilateral development partners, have been very co-operative, in providing us with the necessary required assistance (both financial and otherwise), in order to contribute in no small measure, to the resounding successes, of the aforesaid National Reform Programs, under the present dynamic and visionary stewardship of, His Excellency President Adama Barrow. Indeed “A journey of a thousand miles, begins with a single step”, as the famous Chinese proverb says.

The TRRC, should indeed be warmly congratulated, for successfully completing half of its 2-year mandate now. Indeed “Tempus Fugit” (Latin: ie time flies). Victims of human rights violations, under ex-President Yahya Jammeh’s dictatorial regime, are indeed elated about the eye-catching article titled: “T.R.R.C. to start monetary reparations soon”, published in the front-page of The Standard Newspaper publication, of Wednesday 29th April, 2020.
Thesaid victims are also more elated, with the TRRC’s recent public notice, which has been repeatedly published, in the first page of recent Standard Newspaper publications, for many days now, which inter alia says: “The TRRC is here for all victims of human rights violations….” The said public notice, also contains Official telephone numbers or help lines for “Save Our Souls” (S.O.S.) calls, which the said victims can effectively use, to call the TRRC, and it ends thus: “Truth, Justice and Non-Recurrence is our goal, Thank You”. This clearly means, that the TRRC is not going to discriminate against the said victims, in contravention of Section 33, of our present 1997 Constitution, which is still in force.

This public notice is a paradigm shift, from what my learned junior, and the TRRC Lead Counsel, Mr. Essa Faal, maliciously, unethically and erroneously told me and my friend, in my friend’s house in Kanifing, on Sunday 5th April, 2020, when he inter alia flippantly said :- “Yes, we have already called some Civil Servants to testify publicly at the TRRC, but unlike DR. Carrol, those Civil Servants, had either been sent to the N.I.A. or to prison, during ex-President Yahya Jammeh’s dictatorial government, and since DR. Carrol did not suffer as such, then his alleged human rights violation is less serious, and The TRRC is dealing with, the most serious human rights violations.” This is unjust, unacceptable “Selective Justice.”

I am vociferously putting it to Mr. Essa Faal that “psychological imprisonment”, is far more devastating than “physical imprisonment.” The late Jamaican legendary singer, Bob Marley, in his masterpiece album “Uprising”, said: “Don’t free my hands, and leave my mind in chains.”. My good friend and former U.T.G. colleague, DR. Lamin Sidibeh, now a Professor at the American University, with a PhD in Psychology, has authoritatively confirmed this. This is called “expert evidence” in The Law of Evidence.

As you may be fully aware, the aforesaid unacceptable and grossly unjust statement of Mr. Essa Faal, instantaneously galvanized me into action, or it prompted me to write a polite and fitting letter of protest, to His Honour, DR. Lamin J. Sise, a senior Cambridge-trained Jurist, and the able, competent and impartial Chairman of the TRRC.

The aforesaid repeatedly published public notice of the TRRC, in The Standard Newspaper, resonates the famous Jurisprudential contents of “The Magna Carta”, which is a Charter of Rights, agreed to by His Majesty King John of England at Ronnymede, near Windsor, on 5th June, 1215 (ie. In the 13th Century). Google authoritatively defines this Carta thus: “The Great Charter………, it established the principle that, everyone is subject to the law, even the King, and guarantees the rights of individuals, the right to Justice, and the right to a fair trial.” “The Magna Carta”, is the fabric or substratum of Common Law, which is indeed, part and parcel of Gambian Laws, as evidenced by Section 7 (D) of our present 1997 Constitution, which is still in force.

I sincerely pray to the Great God Almighty, to grant both your good self, and all your esteemed or distinguished colleagues at the TRRC, the superlative wisdom, of “King Solomon The Wise”, for all of you, to be able to professionally and efficiently discern, truth from falsehood, and to efficiently execute your Official mandate, as clearly stipulated in the TRRC Act (2017), “Without fear or favour, affection or ill will, so help me God.”
Let me enrich or embellish this timely epistle, by quoting a very important and relevant stanza, of a famous Methodist hymn, which is the figment of the fertile poetic imagination, of the late Mr. James Russell Lowell (An erudite British Methodist Hymn writer and poet), which goes thus:
“Once to every man and Nation,
Comes the moment to decide,
In the strife of truth with falsehood,
For the good or evil side.”
Finally, let me put on record, my mammoth gratitude, to you Mrs. Adelaide Sossehbecause last year (2019), you ably led a high-powered TRRC delegation, to The Wesley Cathedral, at Dobson Street in Banjul, (my Church), The Mother Church, which is “Primus Inter Pares”(Latin:- the first among equals), among Gambian Methodist Churches, to fully and ably explain to a large audience, the official operations of the TRRC Rev. Bannie Manga, a Secretary of Conference Emeritus, of The Gambia Methodist Church (from February, 2011 to 2016), was the able Master of Ceremonies (M.C.). I rightly took the microphone, and told both your TRRC delegation, and the massive audience, how ex-President Yahya Jammeh, had persistently and systematically violated with impunity, the human rights of both Gambian Christians and Christians in The Gambia. “Quic Quid Plantatur Solo Solo Cedit” (Latin: ie what is attached to the land, is also part of the land).
Please accept Honourable Mrs. Adelaide Sosseh, the able Vice Chairperson of the TRRCand the Chairperson of the Reparations Committee, the renewed assurance of my highest consideration, and fraternal esteem.
Yours in the Rule of Law
(Sgd.) DR. Henry D.R. Carrol (M.R.G.)