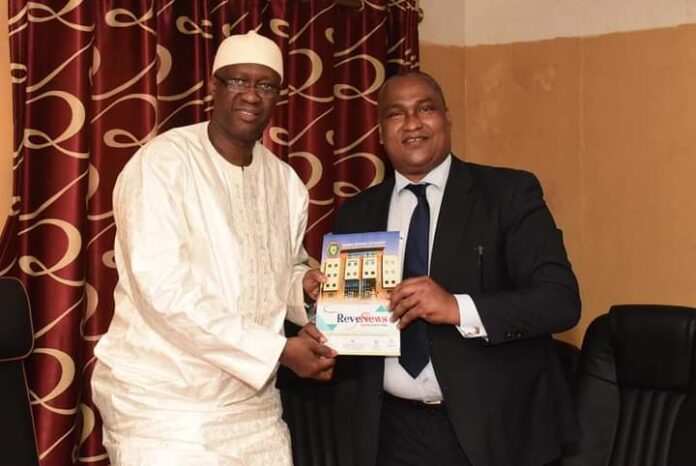 As part of efforts to strengthen ties and promote trade facilitation between Guinea Bissau and The Gambia, Dominico Sanea, the Director General of the Bissau Guinean Customs, paid a visit to the GRA Commissioner General on Friday 16th October, 2020. He was accompanied by his Technical Advisor Amadou Diop.

The visit was facilitated by Bakutobo Sillah, a business executive with Abdou Jeng of the Jiboroh Customs Post.

In his welcome remarks, CG Yankuba Darboe expressed his profound appreciation for this visit by his counterpart which will cement ties and strengthen trade facilitation between the two countries.

“This is critical given the huge trade that takes place between Banjul and Bissau. Today’s meeting being the first of its kind between the two administrations is a welcome development in the context of regional integration and addressing challenges in the free movement of people and goods,” he said.

The CG statement was followed by a presentation by Yahya Manneh, director Technical Services on the GRA model which focuses on the history, structure strategic focus and mandate of the Authority.

Unlike the Bissau experience, the GRA is a combination of customs and domestic taxes as operational departments and six other support departments. According to the presentation, GRA collection accounts for 60% of government revenue which is a fundamental pillar in building a modern country.

In reaction to the model, Sanea expressed his satisfaction in the Gambian experience and immediately called for the two administrations to develop an MoU and start working in building a bilateral relationship.

In an attempt to strengthen the call for the fulfilment of the demand, CG Darboe quickly proposed the setting up of a 12-man technical working committee; six from each side.

The Bissau DG has also extended an invitation to the GRA CG and his team to visit Bissau as soon as possible with a return visit to Banjul following three months later. From this, the relevant stakeholders and players in the respective countries should be involved and informed immediately.

Essa Jallow, Deputy Commissioner General and Head of Domestic Taxes, used the opportunity to also express his appreciation for the high profile visit. He further encouraged the meeting to also work on easing challenges in the cashew trade which is currently facing serious challenges.

Commissioner General Darboe encouraged the learning of best practices among our sister institutions and governments which is the way forward for sustainable development. He also encouraged his counterpart to endeavour to earn political support from the Bissau authorities as a means of sustaining efforts in meeting the revenue targets set for him.