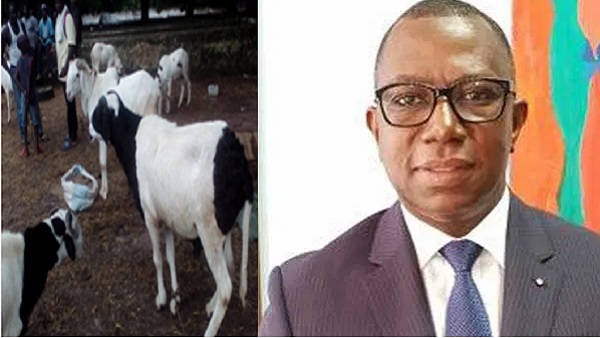 The Gambia Chamber of Commerce and Industry has called on government to rapidly fulfill their promises of importing rams in to the country as the Tobaski is fast approaching.

The government, through the ministry of trade, has announced it will bring a shipment of sheep to make it affordable amid border closure due to Covid-19.

ʺCurrently as the Covid-19 hits and the Tobaski is approaching, we are working with the government in making sure how best business people can be helped to minimise the challenges they are facing, ʺ Alieu Secka, Chief Executive Officer of GCCI told The Standard exclusively.

He said the borders are closed and animal dealers are coming from all parts of the regions “but hopefully if governments arrangement to bring vessel of sheep to take care of the large expense of Gambians mostly Muslims is fulfilled then the challenges would be solved.

ʺThere are sheep coming in to the country as at now which we don’t know how but we have seen a lot of them already. Most importantly as the chamber of commerce, we are concerned about the likelihood of the small medium entrepreneurs in the Gambian businesses which have being affected and currently their income level has been diminished, ʺ he said.

Mr. Secka called on government to speed up on the said shipment they promised to Gambians because it’s almost Tobaski and most Gambians are complaining.

Alieu Jallow, a ram dealer, said last year he brought over hundred rams into the country but that hasn’t happened this year because of the border closure.

ʺBuying and selling rams is my profession but this year is the worst among the past years of my career as a businessman because I could have done a huge business which is restricted by the lock down, ʺ Jallow noted.

According to him, it’s even very hard to sell as most people’s incomes are affected by the coronavirus.

Muhammed Bah, also a ram dealer,called on fellow Gambians to engage in to sheep fattening in order to feed our own nation without outside countries.

Ousman Camara, a buyer said this year rams are very costly because of the corona virus outbreak, saying that there is need for government to put measures in how people handle prices in this pandemic.

He said it is getting worse despite the pandemic being an issue affecting people, adding that people should fear God and know that it’s not all about money but also humanity and worshiping the Almighty Allah.