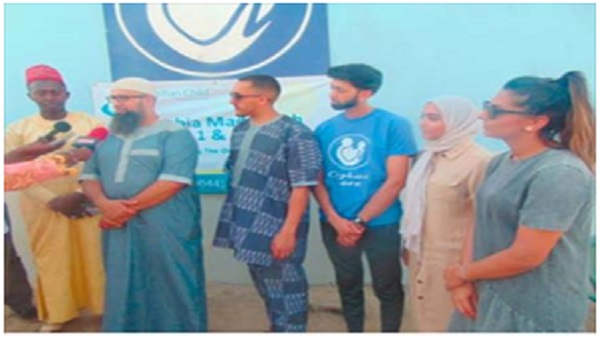 Orphan Child, a UK-based charity has expressed pleasure with its presence in The Gambia to support learning and water provision. It says special emphasis would be placed on the needs and aspirations of orphans.
The organisation has already built and opened classrooms, a borehole, toilet and sanitary facilities at a Madarasa in Busumbala, Kombo North. The charity also laid the foundation stone for the construction of an extra classroom block that officials say will ease the placement of teeming number of students who have shown interest to register at the school.

Head of its delegation to The Gambia and member Iftkhar Hussain, said the foundation has dug more than 25 wells and boreholes.
“We are also planning to commence the construction of a new Madarasa for the children of Bwiam and more wells and boreholes will follow very soon. The charity has brought difference in the lives of people. This is really humbling and an opportunity to do our part towards the improvement of mankind on this earth because once you die is over and you cannot make any difference,” he said.

He said this was why they took it upon themselves to build orphanages across the world.
“We have spent about 15, 000 pounds in the project and that 3, 000 pounds was spent on the construction of the borehole at the Madarasa to make water accessible to both the school and the local neighbourhood.”
The National Assembly Member for Busumbala constituency, Saikouba Jarju, thanked the charity for supporting his constituency. He called education and water “cardinal components” of the National Development Plan.

He said: “As a national assembly member I am very proud to witness such development projects in my constituency. This is what I am looking for every day. Islam we all know has been the guiding principle in this country. We have to try and help the teachers so that the school will be successful. This is the only way we can impress our donors,” he said.
He called on the donors to lobby more funds for The Gambia, saying Gambian Muslim children are vulnerable because the government does not invest substantially in Islamic education.