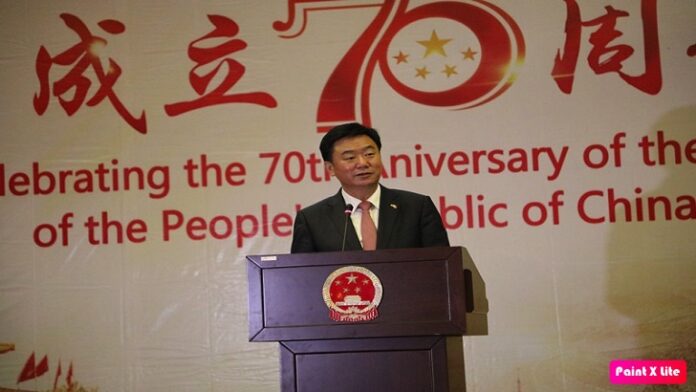 On 29th September, a virtual function celebrating the 71st anniversary of the founding of the People’s Republic of China was held by the Chinese Embassy. Ambassador Ma Jianchun and Gambia’s Foreign Minister Mamadou Tangara delivered warm remarks. Representatives of the Chinese community in The Gambia attended the event via virtual link.

2020 marks an eventful and challenging year because of Covid-19. Ambassador Ma said under the strong leadership of the Communist Party of China and the Chinese government, and with tremendous sacrifice by 1.4 billion Chinese people united together, China has become the first major economy in the world to return to growth since the outbreak.

“And we are happy to see under the able leadership of President Adama Barrow a lot of efforts and achievements have been made by the Gambian government and people in fighting the coronavirus. That is really commendable,” the ambassador stated.

Referring to China-Gambia cooperation among many other areas, Ambassador Ma listed many achievements despite challenges brought by Covid-19. These include, the China Aid-funded Sir Dawda Kairaba Jawara International Conference Centre officially handed over to the Gambian government in January 2020; the URR roads and bridges are under construction with nearly 70% completed; the work of Chinese agricultural experts; and the award of Chinese government scholarships to 28 Gambian students.

Minister Tangara conveyed heartfelt congratulations on behalf of President Barrow, The Gambia government and people on the 71st anniversary of the founding of the People’s Republic of China. He took the opportunity to reflect on the bilateral win-win opportunities as well as the numerous mutual successes registered during the past year, saying China has been a shining example of how to best tackle and conquer the perils of Covid-19 and reach helping hands to other countries.

Minister Tangara thanked the Chinese for the timely and magnanimous donations of medical supplies which have been instrumental in curbing the spread of Covid-19 in The Gambia.

He underscored The Gambia’s determination to work with China under the development framework defined by the Forum on China-Africa Cooperation (FOCAC) and renewed the country’s resolve to stand firm with the Chinese people, in respect of the one-China principle.