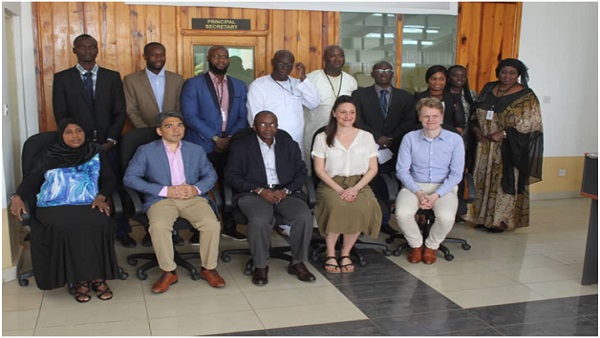 The country’s first ever Public Participation Platform, PPP was launched Tuesday in a bid to fully engage the citizenry in the reviewing of the Gambia’s 1997 constitution.
CRC is an independent government agency established to draft a new constitution for the Republic of The Gambia and to prepare a report in relation to the draft constitution.
Its officials launched the PPP in partnership with International for Democracy and Electoral Assistance, IDEA and said it will be used to seek public opinion on constitutional review matters.

Shortly after the launching, CRC staff were trained on how to use the PPP and gather information. The ceremony happened at the CRC Secretariat in Kotu.
Justice Cherno Sulayman Jallow, chairman of the CRC described IDEA as one of their key partners in the development of the new constitution for The Gambia.
“We partner with IDEA primarily to assist us in specilised areas where they have over the years developed a lot of skills and one of those is in relation to developing online platform, which will be used to seek public opinion on constitutional review matters,” he said.
The chairman added: “It is so extremely important that we are having this training, so that our staff will not only master and fully understand what is required of them but it will also give Gambians the opportunity to be part of the constitutional review process and express their views and aspirations on matters that they wish to see in the new constitution.”
He called on all to continue to work together to ensure we have the constitution we all desire at the end of the day.

“There are lot of expectations from Gambians, and we must deliver as a commission. The platform will help us in gathering and determining what truly reflect the wishes and aspirations of Gambians,” justice Jallow said.
Sumit Bisarya of the IDEA, equipped: “We have been working since the end of 2017 with the Government in preparing for transitional process including the constitutional reform process and transitional justice process.
When CRC was established, we invited them together with the UNDP for a meeting in Hague. From that meeting some of the requests include public participation platform which is being launched today.”

Bisarya said for the new constitution to be successful, all and sundry must play a role.
“I think the CRC has done an excellent job in using the voice of the people as a starting point and what the new constitution should said and how they should respond to the hopes, dreams, needs and aspirations of the Gambian people,” Bisarya stated.
Omar Ousman Jobe, CRC executive secretary who chaired the occasion, hailed the new development.