Creating a brand-new chapter of comprehensive and rapid development of China-Gambia relations in the new era —On the 70th anniversary of the founding of the People’s Republic of China (By H.E. Ma Jianchun, Chinese Ambassador to The Gambia) 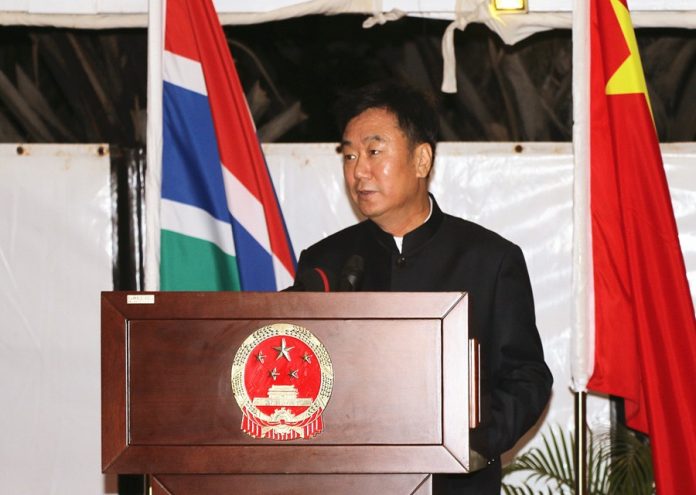 The incoming 1 October marks the 70th anniversary of the founding of the People’s Republic of China.

70 years ago, on that date, the People’s Republic of China was founded after over a century-long arduous struggle by the Chinese people. 41 years ago, China started its historic journey of reform and opening-up.

It has been seven decades of relentless progress despite trials and tribulations.

China’s GDP has been increasing by more than 450 times, from $30 billion in the early years of New China to more than $13.6 trillion in 2018. China is now the world’s second largest economy, largest industrial country, largest trader in goods, biggest holder of foreign exchange reserves.

China has been the world’s second biggest destination of foreign investment for two years in a row, and boasts the world’s largest population of middle income.

Over the past 40 years, China has lifted 740 million people out of poverty.

And by 2020, we will achieve comprehensive poverty eradication with no one left behind.

This will be a new miracle in the history of human development and poverty reduction.

Moreover, China is contributing over 30% of global growth, acting as a key driver for world economic growth and a major force for world peace and development.

Modernizing an enormous country with a population of nearly 1.4 billion is unprecedented in the history of mankind.

Boasting more than 5000 years of uninterrupted civilization, the Chinese people under the leadership of the Communist Party of China (CPC) resolutely embark on a Chinese way which is one of building socialism with Chinese characteristics.

This Chinese way is deeply rooted in Chinese history and broadly based on Chinese national conditions and embracing the world as well.

China is committed to the path of peaceful development and the building of a community with a shared future for mankind, calls for jointly building a new type of international relations featuring win-win cooperation and partnership.

To strengthen cooperation and solidarity with developing countries continues to be the staunch strategic priority for China’s diplomacy. This is determined by what defines China as a country and by the system and values China upholds.

China is the largest developing country in the world.

No matter how much China grows in strength, and how the international landscape evolves, this strategic priority of China will remain unchanged.

In its relationship and cooperation with Africa, China upholds the principle of sincerity, real results, amity and good faith and that of pursuing the greater good and shared interests.

The FOCAC Beijing Summit held last September was a great success and a new milestone in China-Africa relations, as it ushered in a new era of an even stronger community with a shared future between China and Africa.

During the Coordinators’ Meeting on the Implementation of the FOCAC Beijing Summit Outcomes in June 2019, a great many cooperation agreements were signed with a joint statement being issued.

The Meeting steered China-Africa cooperation along the direction of high-quality and sustainable development, demonstrated China and Africa’s strong will and firm resolve to strengthen solidarity and cooperation, uphold multilateralism and build a closer China-Africa community with a shared future.

As China’s ambassador to The Gambia, I am happy to reflect that this year also marks the 3rd anniversary of the resumption of China-Gambia diplomatic relations, and that in the era of the New Gambia and within the framework of FOCAC and South-South cooperation, China-Gambia cooperation yields a lot in a very short period of time, the bilateral ties are now at a new phase of comprehensive and rapid development.

The momentum of high-level exchanges is strong while mutual understanding and political trust being deepened. Chinese President Xi Jinping and President Adama Barrow held bilateral talk and meeting twice within two years, expressing their satisfaction with the achievements made in the development of bilateral relations.

The road and bridges project in URR is well under construction.

People-to-people exchanges in many areas such as education, media, culture, youth and women are strong and active. There are already hundreds of Gambian students studying at Chinese universities.

This year alone, more than 400 Gambians will go to China for various short-term training or study programs on a variety of development-related subjects.

And forty Gambians from very different family and educational backgrounds are awarded the Chinese government scholarships.

The majors chosen by the awardees cover a wide range that may benefit the implementation of The Gambia’s National Development Plan.

Meanwhile, the third batch of China Medical Team and first batch of agricultural experts have arrived in Banjul this year.

They are providing quality medical services and agricultural technical assistance to The Gambian.

In June, China and The Gambia also signed an economic and technical cooperation agreement for China to offer The Gambia a grant to improve the latter’s infrastructure.

On issues involving the core interests and major concerns of the respective countries, our two sides are ready to render each other mutual understanding and support.

The Gambian government firmly adheres to the one-China Policy which is the very political foundation of our bilateral ties and that of China’s diplomatic relations with any country in the world. China appreciates that.

Ever since my arrival last November, I have been witnessing tremendous efforts and achievements made by the Gambian government and people in coping with development challenges and building the New Gambia.

The rich outcomes of the FOCAC Beijing Summit render unprecedented opportunity for China-Gambia cooperation at a new stage of sound and strong development.

China would also strengthen experience sharing and practical cooperation with The Gambia in poverty reduction for development, and working together to harness the advantages of The Gambia’s human and natural resources for sustainable development outcomes.

In my capacity as China’s ambassador to The Gambia, I am proud to say that China-Gambia relations focus on and benefit the peoples, and that as China and The Gambia join hands, I’m sure our two peoples will benefit more and our brotherly ties will go from strength to strength.

I firmly believe that China and The Gambia can and will develop an exemplary new state-to-state relationship featuring mutual respect, fairness and justice, and win-win cooperation, and contribute to building a community of shared future for mankind.

Fellow Citizens, Residents of The Gambia, It is now obvious that no one is immune to the coronavirus and its impact. The recent increase...
Read more
Speech