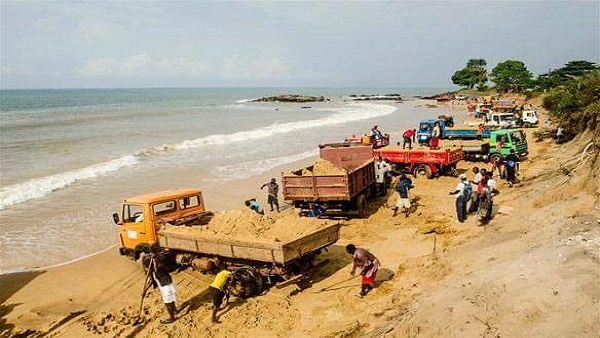 Scores of environmentalists from the coastal villages of Kartong, Gunjur, Sanyang and Sanbuyang in Kombo South District of West Coast Region last Saturday, 2nd May, 2020 held a daylong workshop sponsored by Unity Mining Company and organized by the Gunjur-based Environmental Concern Group on the impacts of sand mining on the coast and wildlife amongst others.

According to Lamin Jammeh, chairperson of Environmental Concern Group, the common impacts of sand mining are loss of farm or grazing lands, formation of pits with water stored in them, enhancement of erosion and loss of vegetation, collapsing of coastal banks, habitat destruction, destruction of landscape, generation of conflicts among various interest groups like conservationists, farmers and miners, loss of biodiversity and dust and noise pollution.

He disclosed that other impacts of sand mining are: that abandoned mines serve as sources of breeding grounds for mosquitoes and reptiles such as snakes, loss of economically important ecosystem (coastline) which can create employment through ecotourism development, and the pollution of underground water.

Lamin Jammeh stated that sand mining has taken up most of the productive land meant for farming and animal rearing noting that for sand to be extracted, vegetation which serves as food for animals and agricultural purposes are being destroyed.
Discussions, questions and solutions were proffered by the participants.

The high demand on sand for construction makes it near impossible to stop sand mining rather minimizing it could be achieved and some recommendations advanced by the participants include; forming integrated body by coastal towns to checkmates sand mining, establishing ecosystem restoration camps in coastal towns, training people in fish and shrimps farming, awareness campaign, encouraging re-dunning system in excavated areas.