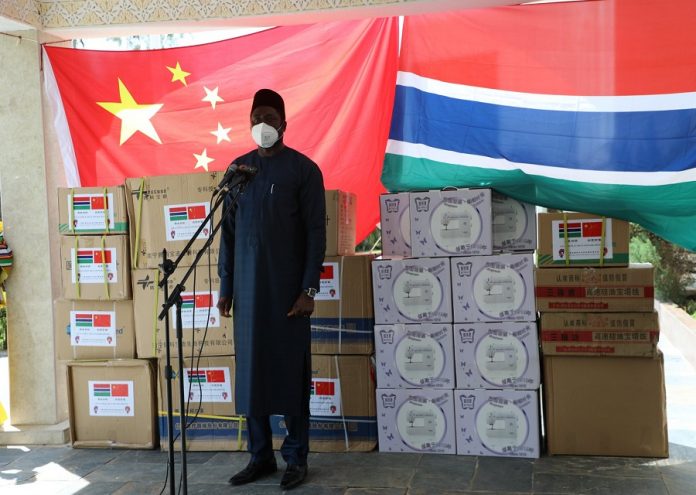 The Hon. Minister of Foreign Affairs, Dr. Mamadou Tangara, on Saturday 25th July described the corona virus outbreak in The Gambia as an exceptional crisis that warranted urgent attention from all actors in a bid to combat the pandemic.

The donation is the third in a series of support from the People’s Republic of China to The Gambia for the past three months.
Giving a chronology of Covid-19 support from China, Foreign Minister Tangara recalled that the initial medical consignment donated by Jack Ma Foundation to a consignment from the Chinese First Lady through the Office of the Gambian First Lady and now a provincial government in China.

“We cannot thank you enough for your support,” Minister Tangara said. “When we talk about a community of shared future between China and Africa, this is a typical demonstration of it,” he posited.

Speaking at the handing over ceremony, the Ambassador of the People’s Republic of China, H.E. Ma Jianchun said the medical supplies came from Guangxi Zhuang regional government in Southern China, which is a twin city to Banjul. Ambassador Ma informed that the Chinese Embassy in Banjul added 15 electronic sewing machines to the donation.
As wearing face masks in public is now mandatory, Ambassador Ma expressed optimism that the sewing machines could through the First Lady’s Office show his country’s gesture in helping boost the production capacities of locally-made face masks.

Gambia-China relations blossom
It could be recalled that Gambia and China have had strong diplomatic ties dating back to the first Republic under ex-President Sir Dawda Jawara. Relations were unfortunately interrupted in 1995 when the military junta decided to cut ties with China.

The severed relations which lasted for two decades were restored in 2016. The Gambia, under the democratic dispensation of President Barrow enjoys a blossoming of diplomatic relations with China. Following his dramatic ascension to power in 2016, President Barrow vowed to follow the one-China policy, thereby rekindling the Beijing-Banjul relationship.
The deepening mutual political trust is evident by the two high level visits of H.E. Adama Barrow to China in December 2017 and September 2018. The President’s second visit in 2018 marked Gambia’s formal joining to the Forum on China-Africa Cooperation, which shows that both sides are ready for practical diplomatic cooperation.

Speaking to waiting journalists at the foot of the aircraft upon arrival from China in September 2018, President Barrow said of his visit: “We were there to cement and strengthen relationship between the two countries…there was a break…but we assured them that this break was not the wish of the Gambian people…It was a decision of the former head of state and I think that message was very clear.”

According to President Barrow, The Gambia will not only stop at enjoying the cooperation but as well learn how China spectacularly developed in such a short span. And as a result, a number of Gambian Civil Servants and students have been sent to China for training.
China on their part has pledged and honoured visa exemption for Gambian diplomatic and service passport holders. There is also strengthening of technical cooperation on tourism, agriculture, education, security, communication and coordination in international and regional affairs, etc.

The Ministry of Foreign Affairs is committed to further deepen and widen the already cordial bilateral relations set out by the two leaders.

Issued by the Ministry of Foreign Affairs, International Cooperation and Gambians Abroad