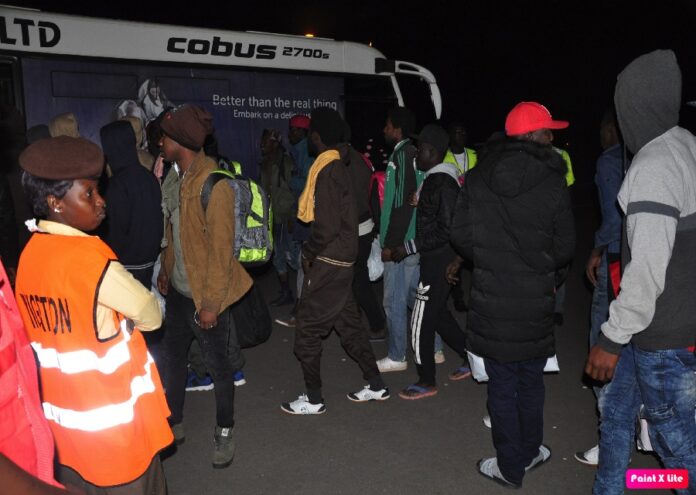 In the 1980s, a younger Adama Barrow arrived on a scheduled flight from Germany. He was a deportee who just arrived in Banjul to begin a fresh life as a returnee. Barrow would be a successful real estate dealer and a politician.

In late 2017, Mr Adama Barrow was hosting the German president Frank Walter Steinmeier in Banjul as head of state. At a press conference with journalists, Barrow recalled this deportation experience almost 30 years ago, urging Gambian migrants without papers to return home and cultivate alternative means of livelihoods in their own country.

During bilateral talks, the German President, accompanied by big delegation of businessmen and investors discussed many things. Top among them was migration cooperation, although The Gambia government denied discussing deportations with their guest.

“I was deported from Germany but today I am the president of The Gambia,” Barrow had said.

His message was meant to be assuring the migrants back in Germany. If anything, it fell short of that.

Some analysts held the view that the mindset of these migrants can only change if they are backed by the government with actual gestures, not only by President Barrow saying “If I can do it, you can do it too.”

“It would rather need to be, ‘I have sympathy for you, because I have been in the same situation,’” a migration expert who was part of the visiting delegation would later say.

So the question is: What makes Gambian migrants a special case for German politics?

The flexibility of the EU towards Gambian asylum seekers during those years was based on dictatorship in Banjul and reports of persecutions under Jammeh by many new comers to Europe.

On 28th November 2018, the German Interior minister for Baden-Württemberg Region, Thomas Strobl was quoted as saying in the news media that there are 2,500 Gambian refugees whose asylum cases have been rejected and are already identified to be deported.

According to Mr Yorck Wurms, Director of the NGO IRARA and a German expert on migration and reintegration who worked on The Gambia for the European Commission while the cooperation on return started, The Gambia presented “a perfect candidate” for the EU migration cooperation.

Hence the new transitional government’s promise of a fresh start saw the revival of relations with Gambia’s traditional allies and donor partners, including the EU  headed by Germany.

The EU and the Barrow government took off on an ideal start-off, especially after all the frustrations encountered with the Jammeh government. But now, this EU-Gambia migrant returnees cooperation agenda presents a stalemate between the two.

The EU has already provided €365 million in development funds during from December 2016 to date. It further provided €38.95 million from the EU Emergency Trust Fund from 2015 to 2019. In 2018, it spearheaded a roundtable conference in support of The Gambia’s transitional development blue print, the NDP 2018-2021.

Refusing to be repatriated from Germany

The Association of Gambian Refugees in Europe, in a statement in 2019 expressed concern that Germany, like most European countries have already listed The Gambia as a “safe country” and that they are ready to deport all Gambian citizens from Europe. The EU (German) asylum policy mostly recognizes those who have been politically persecuted in The Gambia.

For many months, these migrants knew the negotiations ongoing in Banjul over their fate as migrants in Europe. They sent petitions and made public proclamations to warn the government against a deal that will return them to Banjul to no avail.

They therefore resort to a protest where each had several of their dependents participate in order to bring their concern to the attention of the authorities in Banjul.

“This is very unfair and we will not accept it. Our citizens, like many others, have the right to remain in Europe as migrants or refugees so long as they abide by the laws of the countries they live in,” a statement read through a protest march against the government lifting moratorium on repatriating them.

Since the beginning of the talks in 2019, The Gambia placed a moratorium on accepting repatriation of its citizens from the EU. Between May 2019 and October 2019, Gambia continued to hold its position on not accepting deportees.

As a result, intense talks between EU Delegation and Gambia government saw the EU threatening to make use of visa sanctioning against the Gambia if it fails to lift the moratorium.

As expected, this moratorium got lifted as announced by The Gambia government but without accepting to receive any flights from the EU to bring back migrants.

0% chance of asylum for Gambians

In the meantime, experts say there is a 0% chance of Germany accepting asylum applications from Gambians.

“Galvanizing $1.8billion donor pledge towards your country’s development plan should be good bases for welcoming back your citizens and provide them livelihoods back home,” Mr Wurms, who frequented The Gambia six times in 2018 working on the said cooperation, said.

“Some 25 to 50 returnees per month over a year or so should not rock a boat in the Gambia, especially considering the high numbers that are already living and working in Germany,” he said.

Wurms explained that there are “sincere interests” in Germany to assist The Gambia as evidenced by the visit of their president to Banjul. However, if The Gambia refuses to cooperate, there is the real danger that will restrict the issuing of visa,  since The Gambia is not fulfilling their international obligation to take back their own citizens.

This means that Gambians can no longer travel to Germany and by extension to the EU but it might also impact on the willingness of the EU to assist The Gambia with financial assistance to rebuild their country.

The frustration in Berlin specifically and Brussels generally was heard in Banjul when the EU envoy, Mr Attila Lajos pointed out that even with the said announcement, the EU was receiving “confusing indications” because Banjul still annuls all proposed return operations.

In an interview with The Standard, he said: “This is contradictory, why do you lift the moratorium if you do not want to allow return flights? It does not make sense…,” Lajos said.

The EU apparently expected that return operations would start from January 1st 2020, based on communication between the two governments.

By January 1st 2020, there were already a few return operations planned by commercial flights with only one migrant or chartered flight with six passengers but all these requests were refused by The Gambia.

Just as those talks stalled, coronavirus pandemic struck and international flights were canceled around the world. Nonetheless, the deportation agreement did not die and would resume as soon as air travels resume.

On 21 January 2020 Patrick Sensburg, a CDU member of the Bundestag, wrote to the National Assembly of The Gambia’s foreign relation committee, which is headed by the Hon Sedia  Jatta:

“Following a number of conversations recently …parliamentarians in Berlin and Banjul, can contribute to resolving a number of outstanding issues in a way that is beneficial to our constituents and citizens.

“I would also like to ask you whether you believe that the elements …, with which you are familiar, would be a good basis for further discussion… to take this further. It would be my honour and pleasure to see us, as members of our parliaments with our colleagues, take the relationship between our countries to a different level of friendship.”

“We would now like to see how to renew cooperation. We want to do that in a way that promises long term success. We would like to convey to you a concrete proposal that… seek to implement as soon as possible.”

The Gambian government meanwhile, denied persistent public speculations that they signed deals with the EU to facilitate the deportation of Gambians.

But according to Ambassador Lajos, the EU has been engaging The Gambia for over two years to enable the flow of returnees in the country.

The moratorium was thus officially lifted in October 2019, but including a grace period until January 2020.

So if or when the targeted visa sanction is applied against The Gambia, it will not be the ordinary citizens who face travel restrictions but the elite also, and the spouses of politicians going to Paris for shopping or vacation, according to Mr Wurms.