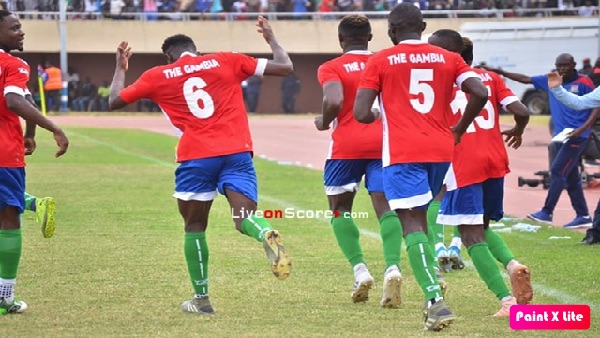 The Gambia national team last night moved back on top of Group D of the Africa Cup of Nations qualifiers taking place in Cameroon in 2022.

The Scorpions beat Gabon 2-1 in an empty Independence Stadium, surrounded by a multitude of people who could not enter because of Covid-19 rules.

Modou Barrow, who missed the first leg against Gabon, proved the hero of the night accounting for the first goal that fired up the Scorpions to shake off any fear of Gabon.

The skillful former Premier League player punished a howler by the Gabonese keeper to drill in the first goal in the 46th minute, almost without effort, thanks greatly to his attention to detail.

He passed the baton to another Barrow, the Bologna attacker Musa, who in the 79th minute clinically finished a defense-splitting pass from the ever-accurate Steve Trawalley to score a fantastic second goal for The Gambia. Steve was the provider of the killer pass that secured Gambia’s Bubacar Jobe’s loan goal in Gabon and his form last night showed he has more in store.  Gabon’s Bruno Ecuele Manga’s 89th-minute goal came only as a consolation.

The Gambia now leads the group on goal difference but stands 7 points apiece with Gabon. Elsewhere in the group, Angola, at 1 point will play DR Congo at 3 points today in Luanda. The Gambia will now need at least three points to put up an unassailable second or first place lead. With the top two finishers in the group assured of a place in the finals, The Gambia is well placed and have every reason to believe she is on the verge of her first appearance in this top continental show piece.