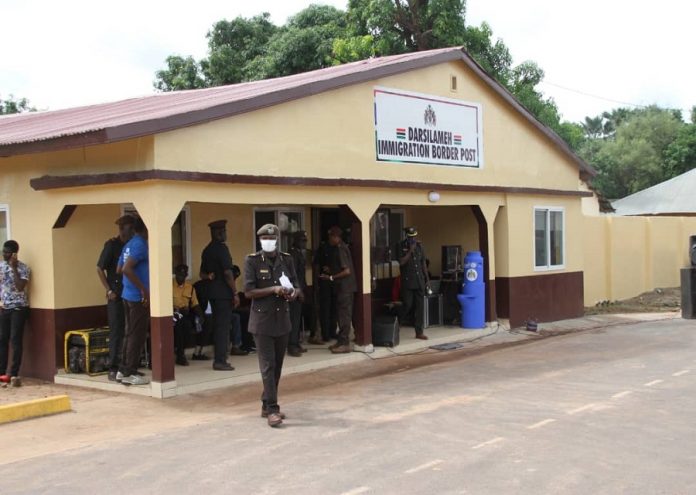 The new stations are expected to ensure better trade facilitations, improve cooperation and coordinate controls as well as step up the fight against transnational crimes.
Hulay Jallow, deputy director general of the Gambia Immigration Department said the inauguration of the new posts represents an important step in the GID’s transformation to establish an effective immigration and border management system and increase border security.

“With many stations like these and many more in the project undertaken by the GID administration in collaboration with other stakeholders, we can establish an effective and migration and border management system that will help facilitate a conducive, efficient and welcoming gateway for admissible travellers to the Gambia and also providing a barrier and deterrent to entry for those seeking to circumvent the country’s migration flow,” Jallow said.

Jallow, a former commissioner of administration added that the presence of law enforcement agents can only be important and serve its true purpose if the security and border communities amplify efforts and collaborate in sharing information.
“The world is in disarray and finds itself in the middle of the Covid-19 pandemic. As we know that migration is a key determinant to public health, it is prudent that we all work together to help prevent people smuggling into the country which are done in a clandestine manner making it difficult for law enforcement agents to deter without full involvement of border communities.”

The Governor of West Coast Region, Lamin Sanneh said the inauguration of the new posts is a big milestone for The Gambia Government’s security sector reform agenda.
Sanneh thanked border villages of Darsilameh, Dimbaya and Omorto for the allocation of the lands and support rendered through the working stages of the stations.
He said these locations are strategically prone to the incursion of illegal elements and called on the officers to use the opportunity to beef up border patrols and coordination to curb illegal entry and smuggling of goods and persons into the country.