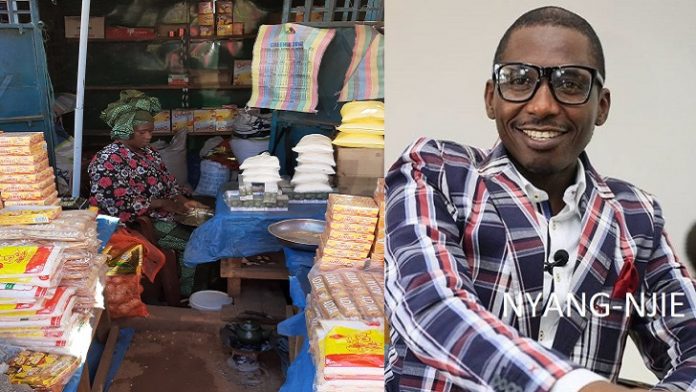 The rapid increase in the country’s domestic debt has raised many questions about fiscal sustainability of current economic policies which is intensified by short maturity period of most government domestic debts
Government borrowing is projected to be D5.6 billion to finance the budget deficit of which D3.9 billion will be raised from the domestic market. This represents an increase of 221% from 2019, and the highest level of borrowing ever in the budgetary history of The Gambia.
Oumie Bah, a business woman in Basse said she used to take loans from the banks but due to the high percentage rates attached to repaying those loans she stopped.

“I stopped taking loans from the banks because I almostwent bankrupt after repaying my first loan and I have no intention to take loans again. I believe I am better off with the little capital I have,” she told The Standard in Basse.

She however called on government to find ways to support small business holders like her to boost their business. “Things are very difficult with us. But we have nowhere to go.”
Badou Ndiaye, a Senegalese national said although he saved all his earnings in the banks when he requests for loans, he is refused because he is not a Gambian.

He argued that the decision of the banks not to give people like him loans is not fair.
But a top banker said Ndiaye’s case might be because he could not provide a collateral. “You don’t blame banks for that. Why should you give anybody for example a fishman in Tanji who doesn’t owe anything apart from a boat that works from one point to another in a minute? These are things that people need to understand,” he noted.

Modou Njie, business development and research officer at the Gambia Chamber of Commerce and Industry, said: “Government borrowing for institutions and banks can be seen as good investment because it is less risky.

“Now during the former regime interest rates were as high as 22%. You tend to see that banks are comfortable to invest in treasury bills where they can, for example, put in two million and get two hundred thousand profit after a year. In circumstances like that the private sector will need to convince the banks they will be able to pay 22% interest. So, this is where many businesses struggle.”

He said although the interest rate has come down under the new government, banks still find it difficult to invest in the private sector because they don’t have the assurances that they could get their monies back.

“The GCCI is helping businesses to improve their planning, marketing and corporate governance. We also encourage them to seek alternative financing from individuals and even family members,” he explained.

Economists associate the lacklustre performance of the country’s private sector to government’s continuous dependence on domestic borrowing.
“When government engages in excessive borrowing it affects private businesses because borrowing to government is risk free premium. So, if the Central Bank is giving 12% as treasury bills that becomes the cost of money. The banks will now have to use 12% as the flow and add their operational cost to it, thereby making the interest rate of the country going up and when that happens it becomes unattractive for borrowers especially commercial borrowers,” Nyang Njie economist and political pundit, said “when they are competing with the banking sector, depositors who otherwise deposit money with the banks will now buy treasury bills because treasury bill is a risk-free investment, when that happens it causes crowding out effect.”

Unsustainability
The country’s current debt to GDP ratio is almost 37% meaning every one-dalasi GRA collects 37 bututs will go directly to paying debt.
Njie said because the government uses funds borrowed from the domestic market to pay salaries, wages, allowances, air tickets among others when the time comes to repay, they struggle.

“For government to repay those loans they have to issue more notes which result to an ambiguous revolving cycle or what is called a debt trap and once you are in a debt trap, you either change your lifestyle or curtail your borrowing,” he noted.
The respected economist added: “This is why many economists are calling for fiscal consolidation and debt restructuring to give the government a breathing time to put its house in order, rearrange and prioritise its financing and borrowing requirements.”
He said with the current lending rates businesses will likely fail “if they borrow monies from the banks.”

“We can change that by agreeing to restructure our economy and go through bitter times. We need to reduce and prioritise our expenditure and defer some of the things we will want and cannot afford at the moment. The first thing that the government needs to do is to have a debt legislature, a law forcing government not to borrow more than X% or in other words debt selling. If you take ten million you cannot borrow until that ten million is cleared off,” he added.

Asked whether government could refocus its borrowing to foreign, Njie replied: “Foreign borrowing is even tougher. These are private people who will calculate risk and they don’t trust government they believe can collapse and can refuse to pay.”
“So, there is what is called sovereign credit rate, each country is rated based on your political and economic risk and likelihood to repay. If you put all these in a basket, if the average global interest rate for international laws is 7%, Gambia might be asked 13% because of the unpredictability of our political/economic environment. This is why we don’t have international funds apart from the World Bank and others which are for capital investment,” he explained.

Onetime director of budget, Momodou Sabally said the country’s debt portfolio is unsustainable.
Sabally said government’s excessive domestic borrowing is good for the banks because instead of going into the risk business by giving loans to the private sector, they are more comfortable investing their resources by lending to the government because “if you lend to the government that means risk free but that is not good for the economy because government is not good at putting money at the right invest.”

“The banks are smart if they know the government is greedy in borrowing, they are comfortable to lend to them because of the risk-free factors because they [banks] have lot of issues with collateral which they have to resort to court with defaulters,” he added.
He said the discussion should not be centred on whether the country should shift to foreign borrowing but cut the level of borrowing.

Trawally said the country’s domestic market is way under-developed “we have minimal investors in the market but from the side of government we have a two-year medium term debt management (MTDS 2019-2020). Our overall objective is to make sure government financing needs are met on the lowest possible cost consistent with a prudent degree of risk .”

“Given the crowding out effect, we are now saying we are going to maximise concessional financing to move away from domestic borrowing,” he said.
He said the current lending rates stand at 7.4% which is expected to go further down.
“Inflation rate is also above the one-year bill at 7.7% and if inflation is higher in economics, it is a negative interest rate. This means conscious investors would not be happy to invest in such adventures because they will not have value for money. Right now, the rate should encourage businesses to take loans. If government reduces its demands there will be enough funds and then the bankers and investors will now be competing for the best interest rate,” he added.

He said the government is trying to encourage investors and banks to loan out to the private sector as a deliberate decision to limit government’s domestic borrowing.
“The problem we face is that we are not operating a balance budget because the expenditure is way more than the revenue. Now the priority is to maximise external concessional loan financing where the loans we are taking will have to be more favourable loans that will give us maturity periods of 30 years of less than 1% of interest rate,” he said.

He said there are serious consequences “if the government only focuses on external borrowing because government needs to play a role in the growth of the domestic market.”
“In November we issued five hundred million bonds where we are telling the investors in the domestic market that government appetite for borrowing is shifting a bit towards the longer term to make sure we minimise the refinancing risk. We allow investors and banks to decide what rate they are going to borrow to government and in turn, government goes for the best offers,” he added.

He continued: “We also need to strengthen the collaboration between the government and the private sector. Government also needs to get the policies right to give investors the confidence to invest in the country and also improve on its accountability and transparency to create the enabling environment for all.”