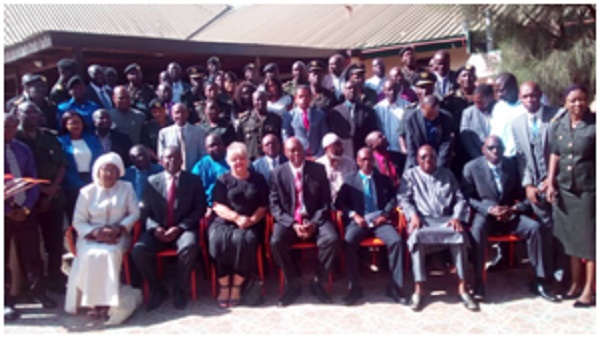 The Gambia Revenue Authority is hosting a five-day World Custom Organization’s [WCO] Timely Release Study [TRS].
The GIZ Deutsche Company funded training, currently underway at a local hotel in Senegambia, is meant to harmonize and simplify the processes and procedures of the Authority.

Presiding over the official opening, the Commissioner General GRA Yankuba Darboe stressed that the TRS workshop is a testimony of the continued collaboration that exists between GRA and its national and international partners.
He added that the two-day forum was meant to harmonize and simplify the processes and procedures of the Authority with a view to successfully implement WTO Trade Facilitation Agreement[TFA], which seeks to lower trade transaction costs and to introduce desirable regulatory changes that facilitate trade.

He described the forum as another milestone in the reforms and modernization efforts of GRA and the capacity building of its staff and key stakeholders with a view to making the authority a highly efficient revenue organization that contributes to economic growth and development as specified in its current corporate Strategic Plan 2015- 2019.
He said due to lack of coordinated border management (sea, air and land) and the involvement of different regulatory border agencies in international supply chain, the Authority has not been able to measure actual performance of customs activities related to trade facilitation as prescribed in WTO.

“Therefore, the implementation of WCO Time Release study will undoubtedly identify bottlenecks in the Gambia supply chain and provide sound basis for planning and implementation to address issues relating to clearance time and costs,” he stated.
“It is my hope that by the end of this training seminar, participants will all acquire the necessary skill and knowledge to periodically measure clearance and Release Time by using WCO Time Release Study Software and to implement concrete measures to speed up clearance of commercial goods by making The Gambia a competitive business environment.”
He also used the opportunity to thank GIZ and WCO for making the training seminar possible.

Alieu Ceesay, Head of Customs, lauded GIZ for sponsoring the workshop that aims to identify the weaknesses of customs officers and devise ways of improving on the bottlenecks, which he disclosed will impact positively on the operations of Custom Officers.
Samsin Bilanga of WCO, said the workshop is part of WCO, GIZ and GRA’s grant agreement, comprising waste management and TRS components, with the objective of ensuring the successful implementation of the trade facilitation agreement.
For her part the, Board Chairperson, Manganga Faye Jagne, stressed the importance of GRA, and how important this partnership. She challenged the participants to embrace “this very important training.”

By Sanna Camara A German civic helper group for Gambian migrants in the Baden Württemberg town “Breisach” has said it confirmed from authorities that in...
Read more
News

By Omar Bah The National Assembly member for Banjul South, Touma Njai, has condemned as embarrassing the decision of parliamentarians to allocate themselves a 54-million-dalasis...
Read more
News

By Tabora Bojang A number of lawmakers seen as sympathetic to President Barrow yesterday boycotted a parliamentary vote called to slash funds in the 2021...
Read more
- Advertisment -

November 30, 2020
The Gambia national Under -20 made history last night snatching both the Wafu Zone A championship trophy and more importantly, a place in next...

Letters: The political hustle is real