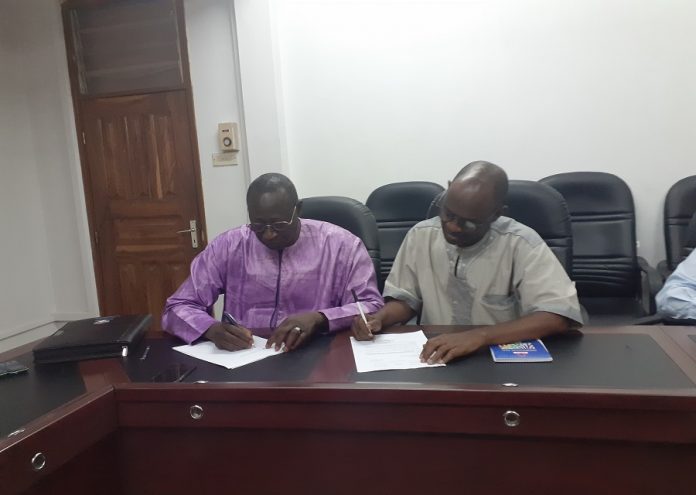 Aframework Agreement for the Development and Implementation of a Four-Star hotel was on Wednesday signed between the Gambia Tourism Board and the National Center For Arts and Culture (NCAC). The Agreement paves the way for GTBoard to build a four star hotel in Barra, North Bank Region (NBR).

About the hotel
The Barra Hotel Project situated at Barra Point, NBR, is 40 rooms four star hotel built by GTBoard. It is meant to solve the long standing need for food accommodation in Barra town which has greatly affected tourism and trade in the town. The hotel will create employment for the community of Barra and environs, give space for artists in the form of craft shops where material of interest could be made and sold to visitors. It will add value to Barra and foster a lot of business related to tourism and culture for the women and youth of Barra and the Niumis.

Speaking at the signing ceremony held at the Ministry of Tourism and Culture (MOTC), Hon. Hamat N.K Bah, Minister for MOTC, congratulates the Director Generals of NCAC and GTBoard for the partnership noting that this is one of the key policies of the government of President Adama Barrow to promote domestic tourism and in promoting domestic tourism, they definitely need to create the facilities and the GTBoard have been the pacesetter in that aspect.

He expressed hope that Gambian investors as well as non-Gambian investors would also come to partake in this new venture in trying to build new facilities upcountry in promoting domestic tourism. He therefore encouraged Gambians to explore their country in order to see its beauty.

Minister Bah commended the GTBoard for fulfilling the aspiration of President Barrow. Hence, on behalf of the Government of The Gambia, he thanked them and prayed that the project will certainly deliver some positive dividends for tourism development in the country.

For his part, Abdoulie M. Touray, the chairperson of the GTBoard, congratulates NCAC and GTBoard for this partnership. He told the meeting that as they go into the post Covid-19 era, it is important that they rethink their strategies and rethink as to the direction that tourism would take. He said what is very evident is that the world is now in a new dispensation and that new dispensation looks at sustainability; how do we ensure sustainability in terms of the planet, people and also productivity?

According to him, the major attraction for people wanting to come to Gambia is premise on heritage; “if we developed our heritage sites and we are lucky that The Gambia is blessed with UNESCO Heritage Sites of which Fort Bullen is one but if you want to promote it you have to look at it in a more holistic manner so that you put in the necessary facilities that are cutting edge, that would attract tourists who want to come and to return and to also stay within the confine of that facility”.

He said the partnership is win-win because it will give tourists the opportunity to discover our culture and rich heritage and it will also bring in development in the area. Thus, he said the new development in Barra will certainly be a game changer for the industry.
Hassoum Ceesay, the director general of the NCAC stated that the signing of the MoU is a sign of partnership between the NCAC and GTBoard under the auspices of the Ministry of Tourism and Culture to erect a four star accommodation facility at Barra Point Fort Bullen which is a UNESCO World Heritage site.

He described the initiative as important to them as it will add value to the UNESCO World heritage site. He added that this also shows the readiness of the Ministry to respond to the National Development Plan (NDP) and also to the needs of the community of Barra because this will also help the community in many ways.
On behalf of the NCAC board chair and staff, he thanked the GTBOARD, saying they are proud of the cooperation.

Abdoulie Hydara, the director general of GTBoard commended the NCAC for giving them the opportunity to come into a public-public partnership. According to him, this is one of the first of its kind and it is a partnership that is worth emulating that they as satellite institutions sharing the same Ministry can come together and develop project that are beneficial not only to their sector but the country at large.

He added that culture drives tourism, so there is no way that tourism can survive without them having a strong partnership to drive the tourism sector without the culture sector within the Gambian tourism destination.

“We want to thank you and we want to ensure that this project is realised and it realised to it full potentials and we would develop this project for the best interest of all of us. Be rest assured that the GTBoard is ever committed for any development that would bring The Gambia into the world map,” he assured.