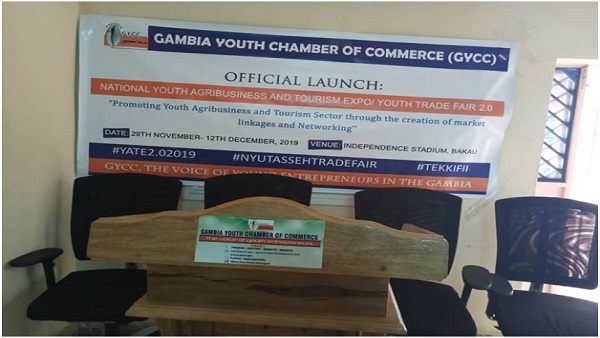 Gambia Youth Chamber of Commerce, GYCC and partners recently launched the second edition of a National Youth Trade Fair on agribusiness and tourism expo at the GYCC head office in Churchill’s town.

The Fair will bring together 200 youths from different business sectors to display their products for two weeks.

Speaking, Baboucarr Kebbeh, CEO of GYCC, said the idea is to mobilise young people to participate and showcase their businesses and services.

“But most importantly, this will enable young people to network and establish more contacts with other entrepreneurs and partners in The Gambia,” he explained.

Ismaila Sambou, president of GYCC, said over 59 million youth remained unemployed and nearly 138 million are working yet living under the poverty line worldwide.

These figures are “[a] massive waste of potential and a threat to social cohesion”, he said.

Despite widespread recognition of how vital it is to invest in youth, efforts remain fragmented and at a low-scale, he said.

“GYCC and partners intend to organise a 14 days youth trade fair to be held at the independence stadium in Bakau, targeting 200 exhibitors across the country.

We believe this will increase the networking, business income, business exposure and creation of potential space for partnership and business linkages amongst entrepreneurs, he said.

Lamin Darboe, the executive director of the National Youth Council, praised the GYCC for doing “an important job” in mobilising and coordinating efforts of youth entrepreneurs.

“We at NYC appreciate your efforts in ensuring that young businesses have a voice. I will always say that GYCC is one of the success stories of the NYC,” he said.

Other speakers included Abdoulie Jammeh, a deputy permanent secretary at the trade ministry, who expressed his ministry’s happiness to associating with this initiative.