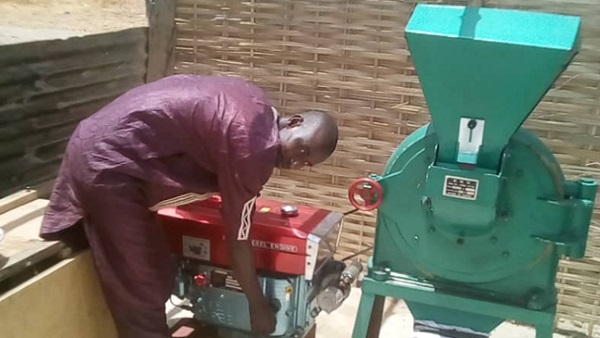 The beneficiaries of the Matching Grant Facility, which is being provided by the National Agricultural Land and Water Management Development Project (Nema) have expressed heartfelt gratitude and appreciation to the benefactor for supporting their various youth groups with processing and pressing machines.

Last month on 21st June, fourteen youth groups across the length and breadth of the country received over 16 rice, cereal processing and oil pressing machines through the Nema project Matching Grant Scheme at a presentation held at its office grounds in Abuko.

The Matching grant is designed to innovate, develop and build medium term financial services adapted to women and youth groups and individual-based Small and Medium Enterprises.

In an exclusive with, one of the beneficiaries of the machines, Ahagie Muya Baldeh, the president of Mbaalondiren Youth Development Association from Basse in Upper River Region commended the Nema project for the gesture, noting that the machines came at the right time as there was only one processing machine in their community which is owned by a Senegalese national.

With this opportunity, he said, the problem of processing machines for their farm produce in their community will be a history.

Baldeh added that the machines will serve as an employment opportunity for some of their young people as they will be responsible for the handling of the machines and will be paid monthly allowances.

He further enthused that this gesture will be used for income generation avenue by his association as they will charge D100.00 for processing per bag compared to the Senegalese processor who charges D110.00.

He used the occasion to thank the Nema Project for coming to their aid in empowering them.

Speaking to another beneficiary of the machines, Musa Bah, the president of Bolongdala Rice Processing from Wassu in Central River Region North (CRR) said the machines have started benefitting his association and the community at large.

“Having the rice milling and the pressing machines will ease the processing burden of rice in Central River Region North hence there was none in the community.

We used to collect from anyone who has more than five bags of paddy rice from his or her farm to process it in the nearby community and return it back to their homes,” he explained.

He noted that machines will benefit his association in terms of creating employment for their members as there are already customers within the community.

Narrating the rationale for his association being opportune to get the Matching Grant, Bah said due to his association’s hard work, Global Youth Innovation Network (GYIN) Gambia Chapter nominated them to the Nema Project to apply the grant for a rice processing machine and a pressing machine.

As part of the grant scheme, he explained that the association is required to contribute 10 percent and the grant will provide 60 percent, while the remaining 30 percent will be paid by his association as a loan within two (2) years.

He thanked the Nema project for coming up with the grant scheme and call on other institutions to emulate them.