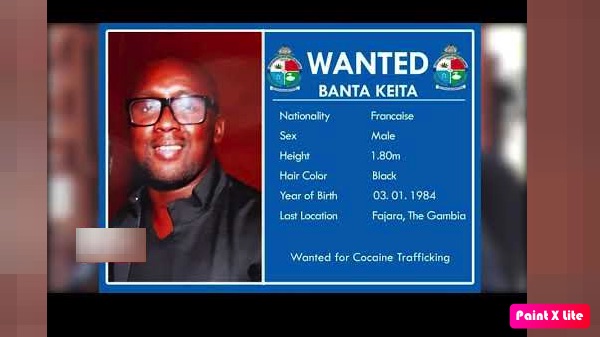 After days of heightened debate on the shocking discovery of about three tons of cocaine at the port, the Government has announced that it has charged and issued an international bench warrant for the arrest of suspected owner of the drug, one Banta Keita.

Keita, 36, who also holds a French nationality, is still at a large and a key suspect in the matter of the cocaine worth over four billion dalasis seized at the port last week.

A statement issued by government spokesperson, Ebrima Sankareh on Friday read: “An Interpol ‘Red Notice’ was issued on 14 January 2021 for the worldwide arrest of Mr. Keita, born 2nd January 1984 in Passamas, Upper River Region in The Gambia after a government request.

“Mr. Keita and his suspected local accomplice Mr Sheriff Njie, born on 6th April 1977, were charged by the Banjul Magistrates’ Court on three counts of aggravated drug trafficking, dealing in prohibited drugs and conspiracy. While Mr. Keita remains at large, Mr. Njie is remanded at the Mile II Central Prisons in Banjul.”

According to the statement, President Adama Barrow has asked the nation’s security service chiefs to put together a taskforce over last week’s cocaine bust.

“During Monday’s National Security Council (NSC) briefing President Barrow directed The Gambia’s security chiefs to immediately constitute a multi-agency taskforce that shall conduct a robust, thorough and impartial investigation into the case and ensure that all legal means are utilized in bringing the culprits to justice. The president unequivocally condemned drug abuse and trafficking, and declared zero tolerance for traffickers,” the statement said.

“Mr. Barrow reiterated his government’s continuous commitment and unflinching support to the Drug Law Enforcement Agency (DLEA) as well as his resolve to fight the drug menace. As a signatory to all major United Nations Drug Conventions and the Convention Against Transnational Organized Crime, The Gambia Government will strengthen the DLEAG in its crusade against drug traffickers,” the spokesman’s statement concluded.