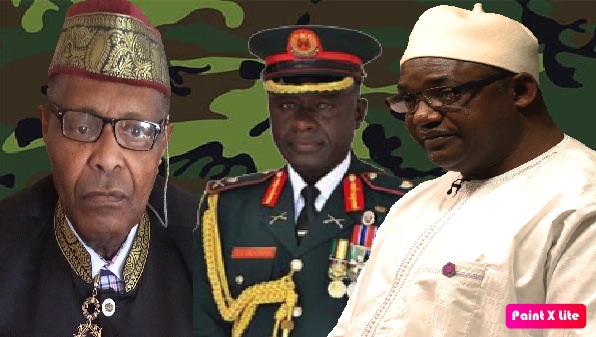 In early 2017, The Gambia experienced the first democratic change of leadership since independence, ending 22 years of authoritarian rule of former president Yahya Jammeh.

After weeks of political stalemate following presidential election on 1 December 2016 when incumbent president Jammeh refused to accept electoral defeat, the West African regional bloc Ecowas deployed troops to finally prompt Jammeh to leave the country as a way of getting him to respect the will of the people.

The mandate of the regional forces has been extended at at least three times since then.  The European Union, which was jointly funding the forces, has since stopped funding the troops and France, who briefly took up the funding, has also said it will no more fund the mission. The Gambia government has however requested Ecowas to let the troops stay through the crucial stages of the implementation of the TRRC among other things yet to be completed.

But speaking in an exclusive interview with The Standard last week, Dr Jobe said: “We are a problematic state right now because we don’t have a national army running this country. I hear lot of the members of parliament talking about our sovereignty, but for us to have that sovereignty, we should be able to have a national army which is operational. This is the reason why right from the start, we thought the president would concentrate on the security sector reform and also the constitution. I am certain majority of Gambians, who understand the delicate international position that we are in, would recommend through the president or draw his attention to the fact that he should not even worry about maintaining his legacy by the construction of roads and bridges – history will give him that legacy if he is able to within the next months before the election in December. Let him give us a functional constitution.”

He added: “But while in the process of rapidly getting the constitution corrected and sent for referendum, the president should accelerate the takeover of national security by the national police and national army as soon as the Ecomig leaves.”

Last month, the Gambian leader travelled to Nigeria in an emergency trip and reportedly asked for military support from President Muhammadu Buhari.

But Dr Jobe, a seasoned diplomat, argued: “It is not in the interest of The Gambia for Ecomig to be replaced by Nigerian soldiers or by a combination of Senegalese and Nigerian soldiers. There is nothing more precious than our sovereignty because it will give us much weight in the international community – when we face UN, EU, AU and all other institutions. If we are operating under a Barrow constitution and having our security in the hands of our national army and national police, we will no more be considered a problematic state and we will recuperate our status as a sovereign, independent state recognised by all other nations of the world.”

“The president should know that if we go to an election without our national army in charge of the security of this country, that would not be good even in his own interest. How can we go to election asking for the mandate of the Gambian people to rule this country when we do not have confidence in our own security services who are citizens of this country? And I don’t think anyone can love this country coming from the outside more than the members of our police and armed forces, because all of them are Gambians and we, the civilians, have no more advantage over them when it comes to the love of this country. If we have confidence in them, I am quite certain that they will protect the stability and security of this country in a manner that they have never done before since our independence. They are gallant men and women who should be motivated by our confidence in them. Let us make them proud to give the best of themselves to this country,” he added.

He said the very action of asking foreign troops to be here while “we are going to election without depending on our own security system means nobody will take us seriously.”