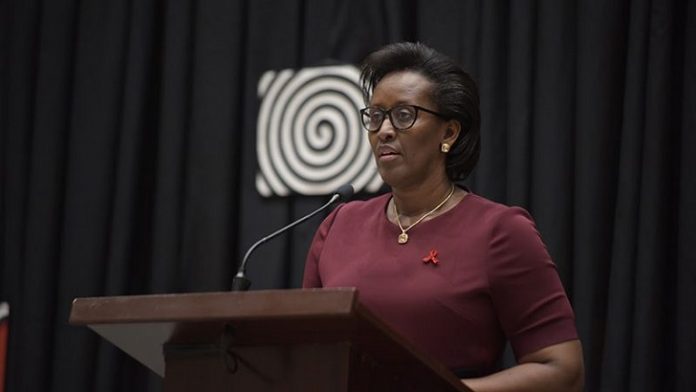 It is another week, and another chance for you to know about our brilliant and courageous women serving as first ladies in Africa.
Today, we take a ride to east Africa, where an inspiring first lady, Jeannette, has been changing lives of women and children, at the same time standing side-by-side with his workaholic husband, Paul.

Jeannette Nyiramongi, born in August 10th 1962, is the fourth First Lady of Rwanda, wife of Paul Kagame the current president. She became the First Lady when her husband took office as President in 2000. The couple have four children – Ivan, Ange, Ian and Brian.

Her predecessors, First Lady Mrs. Vérédiana Kayibanda was the wife of
Pesident Kayibanda who was overthrown in 1973. Grégoire and Vérédiana Kayibanda were imprisoned by the Juvénal Habyarimana dictatorship following the coup. Vérédiana Kayibanda died under house arrest on October 13, 1974
Grégoire Kayibanda (May 1, 1924 – December 15, 1976) was the first elected President of Rwanda. As pioneer of the Rwandese revolution, he led Rwanda’s struggle for independence from Belgium, and replaced the Tutsi monarchy with a republican form of government. He asserted Hutu majority power.

Agathe Kanziga, the second First Lady of Rwanda, Agathe Kanziga Habyarimana (née Kanziga) (born 1st November 1942 in Karago, Gisenyiprefecture, Western Province, Rwanda) is the widow of former President of Rwanda Juvénal Habyarimana and former First Lady of Rwandafrom 1973 until 1994. Kanziga is part of a Hutulineage that long ruled an independent principality until the late nineteenth century. She was arrested by French authorities on 2 March 2010 in France following the French President Nicolas Sarkozy’s visit to Rwanda.

She was frequently regarded as one of the powers behind the throne during her husband’s 20-year presidency, and her family connections to powerful Hutu politicians are often regarded as having provided necessary political capital for Habyarimana. She was the centre of a powerful clique of northern Hutus called le clan de madameor akazu (Kinyarwanda for “little house”), an informal organization of Hutu extremists whose members contributed strongly to the 1994 Rwandan Genocide.

Mrs. Jeannnette Kagame is the Founder and Chairperson of Imbuto Foundation, a non-profit organization whose mission is to support the development of a healthy, educated and prosperous society.
Jeannette Kagame returned to her native Rwanda following the Rwandan Genocide of 1994.

She has since become devoted to uplifting the lives of vulnerable population in Rwanda, particularly those of widows, orphans and impoverished families.
Mrs. Kagame hosted the first African First Ladies’ Summit on Children and HIV/AIDS Prevention in May 2001 in Kigali, Rwanda.

The summit led to the founding of the PACFA (Protection and Care of Families against HIV/AIDS), an initiative primarily focused on providing a holistic approach to HIV prevention and care for the whole family. Kagame later co-founded the Organisation of African First Ladies against HIV/AIDS (OAFLA) in 2002.

She served as OAFLA’s president from 2004 until 2006. OAFLA works to champion initiates related to economic empowerment, health and education throughout Sub-Saharan Africa.
During her mandate as President of OAFLA, she along with her fellow African First Ladies initiated a continental campaign known as “Treat Every Child as Your Own”. This campaign received the John Thompson “Legacy of a Dream” Award. 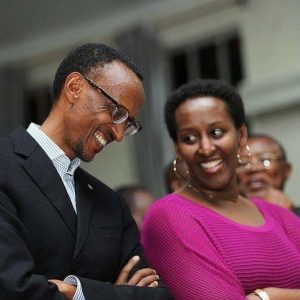 Over the years, PACFA grew to include projects other than those in the HIV/AIDS domain and in 2007 Imbuto Foundation – which means “seed” in Kinyarwanda – was established.
The Foundation implements various projects such as: extending basic care and economic support to HIV affected families; enhancing knowledge and changing attitudes towards adolescent sexual and reproductive health; protecting youth against HIV/AIDS; malaria prevention; motivating girls to excel in school; providing scholarships to disadvantaged youth; promoting a reading culture; mentoring and equipping youth with entrepreneurial and leadership skills.

The First Lady is also a patron of the Rotary Club Virunga, based in Kigali, which established the first public library in Rwanda in 2012. Mrs. Kagame is also a member of the board of directors for several organizations, including the Global Coalition of Women against HIV/AIDS and the Friends of the Global Fund Africa.
In 2010, Mrs. Kagame received an Honorary Doctorate, Doctor of Laws Honoris Causa from Oklahoma Christian University for her significant contribution to the worldwide fight against HIV/AIDS and poverty.

In the same year she was appointed as a Special Representative on Child Nutrition by the World Food Program (WFP).In 2009, UNICEF presented the Children’s Champions Award to H.E President Paul Kagame and First Lady Jeannette Kagame in recognition of their efforts at improving the lives of children in Rwanda. In 2007, World Health Organization (WHO) appointed her the High Representative of the Africa AIDS Vaccine Program (AAVP), to ensure the active participation of African stakeholders in all areas of HIV and AIDS vaccine research and development.

She’s a UNAIDS Special Ambassador for Adolescent Health and well-being, she has been a longstanding advocate for a strong and sustainable AIDS response that is focused on people’s needs.

Mrs Kagame was a co-founder of the Organisation of African First Ladies Against HIV/AIDS and served as its President from 2004-2006.
The First Lady has focused her efforts on the elimination of mother-to-child transmission of HIV and is also working to ensure young people can stay healthy and well as they transition into adulthood.

Jeannette personifies an active, relentless and passionate devotion to uplifting the lives of vulnerable populations in Rwanda; particularly those of widows, orphans of the genocide and impoverished families. As the nation’s First Lady, she has admirably balanced family, social life and philanthropy, not only in her own country but continentally and worldwide.

She has received numerous awards for the past two decades and has been a shining example of a strong woman and an inspiration to millions of African women.
We will be back next week with another amazing African first lady, Janeth Magufuli of Tanzani, whose husband, John, has been Africa’s chief corruption fighter.