Kaddy Jarjue: How a sergeant turned the tide at the Gambia Police Force 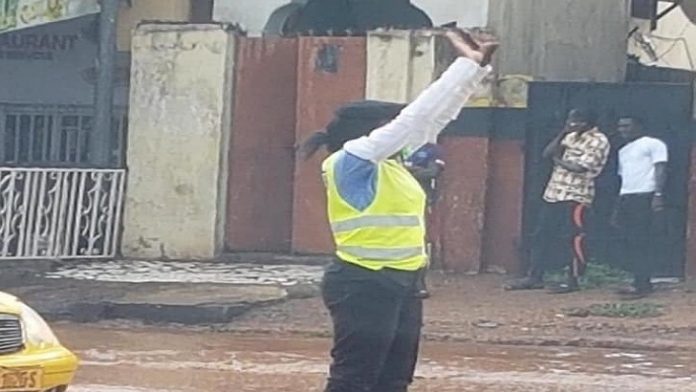 Amid the innuendos and the sustained publicity in the wake of the arrest and subsequent release of human rights activist, Madi Jobarteh, Kaddy has given way to a positive sensation the likes of which has not been seen for many years at the Gambia Police Force.
Little known Kaddy Jarjue walked the work; captured the attention of an eagle-eyed photographer, suddenly the beam tipped the balance on the Police Force for all the right reasons when social media began ruminating about that photo.

A rain-soaked township; some people were rushing home, while others were struggling to shelter until the heavens stop; but for a certain Kaddy Jarjue, she stood still, while her feet were covered by the floods- with no rainboots. Not because she had no other options, but Kaddy was determined to make a mark against all odds- ultimately, she won herself admirers around the world. And a well-deserved promotion which is likely going to set a precedence by all accounts. Kaddy’s elevation has sent an inspiring message: there is always a handsome reward for hard working folks.

As a former traffic officer, I’m compelled to write this note; knowing full well what it means to do this job albeit under difficult circumstances.
It baffles me when I hear ‘raw’ civilians blaming the hard-working traffic officers doing signals for taking some time out to allow drivers on their own to allow other road users to also ply without a traffic officer signalling, in traffic terms called giving due consideration to other road users. In my first week, by the time I returned home, I hardly could lift even a 15 Kgs. It hurts, muscles dead and above all weakens the entire body the following morning.

It requires self-discipline and commitment to control carefree drivers who are mostly incompetent, know nothing about the High-Way Codes not to mention the Motor Traffic Act with all their prejudices towards traffic police for allegedly habitually accepting five dalasi from drivers who regularly commit traffic offences. That reminds me of the erroneous repealing of the famous but most convenient Section 6 (K) of the Roads and High-way Act by the National Roads Authority Act. With that section, traffic officer can easily get a driver obstructing the high way for either talking to a co-driver on the other side while drivers are behind honking; or a taxi driver waiting to collect change from a driver from the opposite direction with no remorse.

With the unfriendly weather conditions, the sun gleams and above all the pollutions all towards the poor but dedicated and loyal traffic officers, here comes the rains with the street of Serekunda to West field, Westfield to Churchill’s Town and Churchill’s Town to Abu Seyall flooded, a place we were promised by our youngest Lord Mayor to take care of before assuming office. The officer preparing the duty roaster posted Kaddy Jarjue to the flood-prone junction knowing full well it was inevitable.

Yes, Commissioner King no doubt is properly coordinating the day to day activity of traffic and most of the time signalling himself, while another tall and lanky female officer at Westfield with smiles and discipline all the times also does good work. On that fateful day, not only did SGT Kaddy Jarju’s performance surpassed expectations, there was no reported accidents and complaints in her area of operations.

While you were celebrated all over, I challenge the police female network to come out with a strong statement encouraging female officers and also with a token of appreciation for Kaddy’s patriotism and how she set the bar so high for all female officers this year.
When I took over prosecution in 2016, I found just a handful of female officers of about five countrywide. I am someone who has no adverse to working with women particularly with young and determined officers. I coordinated with my team to recruit into the unit WPCS like Kaddy Jarju.

TRRC stole my finest Adama Njie, Fanta Secka the first-ever police female lawyer, and the list goes on. Tell me, when we set up the Police Legal Unit, what could we have achieved in the absence of Binta Bouye and Late Chakou Touray? What could have happened to the unit when Chakou Touray succumbed to death and Binta Bouye decided to follow my footsteps in pursuing her LLB with prestigious Cavendish University Uganda? Nyarra Jarju and Adama A. Y Bojang remote controlled Manga and I in managing our files, correspondences and above all the level of maturity and confidentiality they both possessed. Who is more experienced in dealing with children’s cases or sexual offences cases than Mariama Badjie, Isatou .H. Sowe? How could Brikama Prosecution boast of competing Gass Sabally by having one of the finest Immigration attachés Fanta Sanneh? And finally, what can Gorgi Mboob with his agile officers achieve without Woman Inspector Oley Bobb’s leadership in prosecuting those cases? The list goes on and on.

My dear Sgt Kaddy Jarju, continue doing the very best as the best is yet to come your way. Your promotion reminds me when all prosecutors were summoned by Almighty Jesus, Ensa Badjie when he was the IGP to confront prosecutors with our mistakes and encourage us to work hard. During the meeting, on the whole, he had a suggestion box both within the HQ and inside his official and utility car. He spoke a lot and surprisingly the good work I have been doing coupled with the hard work, and in closing the meeting, he promoted me to the rank of inspector from Cadet of less than two years on probation.

Sgt Kaddy, I did promise you a rain boot and will inshallah deliver it to you for your hard work! And good work! While all are celebrating your success and hard work, I was happy that your issue came at a time when the police was at the receiving end of both constructive and unnecessary criticism over the arrest of activist Madi Jobarteh. You helped restore the image of the force! Reconcile the police with the social media who were at war with the police and above all sent a message to drivers that the primary objective of traffic officers is for road users.

In conclusion, I wish to make a plea to all female officers of the Gambia Police Force to prepare at least ten officers as future and first ever Police Inspector Generals, Deputy Inspector Generals and Assistant Inspector Generals. You have the potential and with commitment, you can make a police IGP in less than fours years. It could be Sireh Jabang, Gass Sabally, Fatou Touray, Mam Bintou Ndongo, Mariama Barry, Mariama Jallow Badjie, and the list goes on. One more offer is that I shall organise a free lecture on the MTA and related laws to you once Commissioner King permit me to do so.
Until we reconnect Sergeant Kaddy Jarju, Yaa Allah Yoobma aa Jaarama!