Tribute to Biri and Imam Barham: 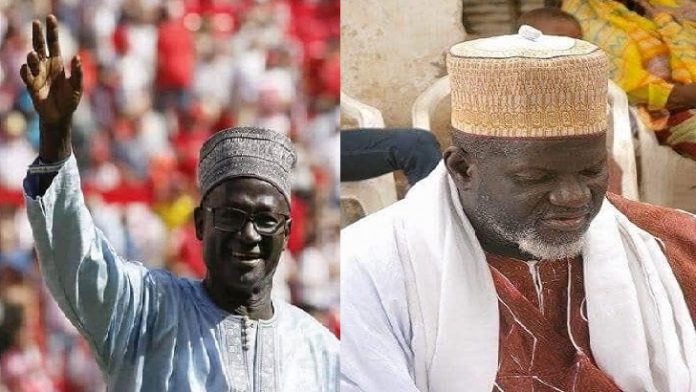 Wednesday, July 22, 2020, marked a somber day in the Gambia that I feel obliged to share this tribute about these fallen heroes. Two prominent and iconic senior citizens closely associated with my generation and have been my very close friends will be laid to rest after suddenly passing away. Alhagie Momodou Biri Njie, the most outstanding football or soccer player Gambia has ever had and Alhagie Barham Jobe, the special Imam Ratib of Serekunda were two friends I grew up closely monitoring their achievements and special contributions to the Gambia and their families.

Long ago after hearing about Biri being a national rising football star, I still remember first meeting him one afternoon during a football tournament at Serekuda School. Suddenly, everybody was magnetized to the famous “guy from Banjul” known only as Biri, proudly being followed by fans while he walked majestically in his unique staggering steps and gaiety smile. You could see how happy he was when a ball was passed to him for a quick demonstration of his unique skills. What stuck most in my mind however was not his spectacular joggling skills which few player could do then, but the hot shot he took outside the 18 yards-penalty box to drill the supersonic-speedy ball into the back of the net that the goalkeeper safely avoided.

Since that day, I can’t keep count of the numerous times I watched the superstar played local and international matches, mostly at “Boxbar Stadium”. Biri, like one Senegalese sports commentator paying tribute to him said, was comparable to stars like Sheriff Sulayman and Peuti Sorie of Guinea and other West African great players; but to me I think he fitted within the ranks of the best in the world, like even Pele of Brazil.

Footballers were and are still known for the special position they played best until you watched Biri flawlessly play every position in the field except goalkeeping. In the field, he played to win as if his life depended on it. He wasn’t much celebrated during his best days and in fact was often denigrated for his low standard of formal education and would have perhaps faded like most of his peers had he not been discovered by foreign visiting teams in the early 70s. That is when the world got to know about the Gambian jewel and when he was utilized and exhibited in the global stage to the maximum. But by then he was relatively older and had lost a good part of his youthful vigor commonly at its peak between the ages of 18 and 30 years.

In an interview he conducted in 2017, somewhere in Europe, he lamented over the unrecognized sacrifices he rendered to the Gambia in his prime days when he used to do what ever necessary to leave his European teams and flew to the Gambia to play for the national squad on his own sponsorship.

After the 1994 coup, he used to call me Captain without the Sarr and we became closer especially after President Yahya Jammeh recognized his past legacy as a devoted nationalist with an international reputation reserved for the best and appointed him deputy mayor of Banjul, a position he throughout appreciated. He also staunchly believed in President Jammeh and the APRC government to the last day. It’s just the fact.

I once reminded him of a goal he scored against Guinea Conakry in a Zone Two tournament at Boxbar in the 70s which he punch into the net with his fist that looked like a header. Much similar to Diego Maradona’s “hand of God” goal scored against England in the FIFA world cup game of 1986 between England and Argentina. Biri’s goal also counted despite goalkeeper Camara’s protest who saw the handball.

But like I said, Biri was an attacker, a winger, a midfielder and the best defender ever, if he chose to be. I have watched him play all positions and was just a gifted fellow. I wish I was not on quarantine to attend the funeral of such a Gambian paragon and a very good friend of mind. May his soul rest in perfect peace.

Imam Alhagie Barham Jobe’s funeral was last Wednesday as well. He was very young when his family came to settle in Serekunda and they had a compound on the road to Serekunda school which was a Quranic school (Dara) as well. Nonetheless the young Barham, the eldest son in the family, spent all his youthful life taking care of his family by harvesting and selling seasonal wild fruits. The way he supported his family when we were ordinary boys living under the care of our parents, illustrated the character of an honest, self-reliant and extremely hardworking person. I used to wonder how he managed his time to study the Quran which he once confessed was mostly done at night after finishing all his daily chores.

At sixty-nine I think he could have lived much longer but may the Almighty Allah receive him in the best place of Jannah.
Having said that, I will add few lines of concern over the unusual high rate of elderly Gambians suddenly dying in the wake of the coronavirus pandemic. Mr. Tombong Saidy yesterday wrote a brilliant paper on his Facebook page about how real the global disease is but also how Gambians are not yet treating it with the seriousness it deserve.
I commented on the article explaining how I wrote extensively on the same topic while in New York City.

Coming to Gambia, I see a nation and people still behaving as if the pandemic doesn’t exist at all. The guards at our quarantine hotel are constantly congregating to drink ataya with no face masks or social distancing. They are of course young and can be among the majority of asymptomatic carriers who have been identified as the most infectious. And it is the elderly, the obese and those with preexisting health conditions who are most vulnerable to the disease.

Moreover, instead of testing the elderly and sickly after suddenly dying, Gambians often rationalize their deaths by generally branding them “too old”, “too sickly” or “their time being up”.

Biri at 73, Barham Jobe at 69, Mbat Jobe 70 another iconic national basketball player, AlhajiBanding Drammeh of the Supreme Islamic Council and many more senior citizens are dying at unprecedented suddenness and frequency.

As a result, I can’t rule out the probability of the widespread death rate from the ruinous effects of COVID-19 among the elderly worldwide wreaking the same havoc on older Gambian men and women. Social distancing doesn’t exist in the country and few respect the basic protocol of wearing gloves, face masks and maintaining proper hygiene. Markets are too overcrowded, mosques still congested, traditional ceremonies attended in huge numbers including funerals, christening and wedding ceremonies which are all fertile grounds for infection.

To survive the pandemic better, we must deal with it much smarter. Let us please save the elderly from the ravage.