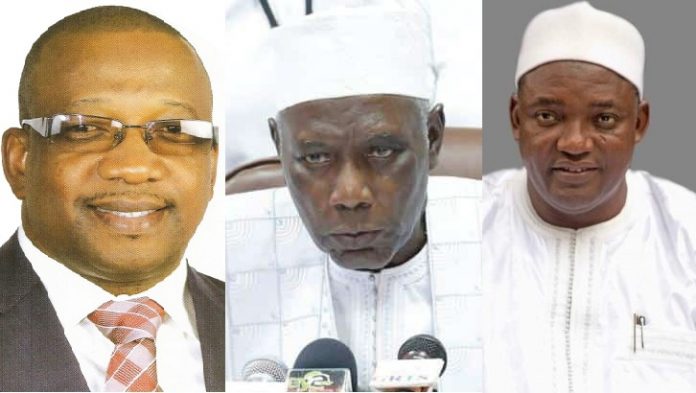 The leader of Gambia Democratic Congress, Mamma Kandeh has called on the Independent Electoral Commission to immediately stop the Barrow Youth Movement from organising political activities because it’s not legally registered.

Kandeh, who was addressing hundreds of Yai Copins and party militants at the Baobab Residence Monday, said BYM is illegally campaigning for President Barrow with total disregard to the country’s electoral laws.

“The IEC should immediately intervene and stop them or else they will create a situation of lawlessness where others will also do whatever they want without following due process.

If the IEC is telling others to follow due process, they should not exempt the Barrow Youth Movement,” he told supporters.

He said BYM should not be allowed to do anything they feel like doing just because they are under the auspices of President Barrow.

“How on earth can a movement which registered as an NGO be allowed to hold political rallies and reporting the cross-carpeting of people from the APRC, UDP or GDC to join Barrow? Is the BYM a political party?” he asked.

The GDC leader said Gambians should wake up from their constant slumber and hold their leaders to account.

He cited the case of the governing Coalition as an example why Gambians should wake up and hold their leaders accountable.

He said political leadership is about being truthful to the people.

“I want Barrow to understand that if Gambians have assessed his level of knowledge, experience or fame they would have never elected him as President because he would never have made the cut.

He was elected based on principle that he was going to serve for three years as a transitional President,” he added.

Kandeh said President Barrow should realise that he doesn’t have the numbers and those who are convincing him to contest for the next election are fooling him.

“Barrow has no justification to even stay for five years talk less of running for re-election and anyone who tries to encourage him should be regarded as an enemy of the Gambia,” he added.

“As far as I am concerned all the political parties in the Coalition should be held responsible for allowing Barrow to do whatever he wanted.

I believe they should not have any chance of being elected in future elections because they have proved to us that they cannot be trusted and are unfit to govern,” Kandeh argued.

He challenged the relevance and legitimacy of the political parties who extended President Barrow’s mandate from 3 to 5-years, adding that those parties put together could not even score more than 8% in the elections that followed the 2016 Presidential election.

He noted that the Gambia Democratic Congress is determined to change how politics is done in the Gambia. “We want to encourage a politics of love and respect,” he said.

He said the country’s political players, CSOs and all stakeholders should galvanise themselves to discuss the problems the country is facing politically and find solutions. The Gambia, he added, is young but cannot tolerate mediocrity and tribalism.

Casamance separatist leader, Salif Sadio has said speculations peddled that his men might have had a hand in the murder and incineration of former...
Read more
News

By Lamin Cham Following the introduction of a new law requiring some African states to sign a bond, prospective tourists and visitors from more than...
Read more
News