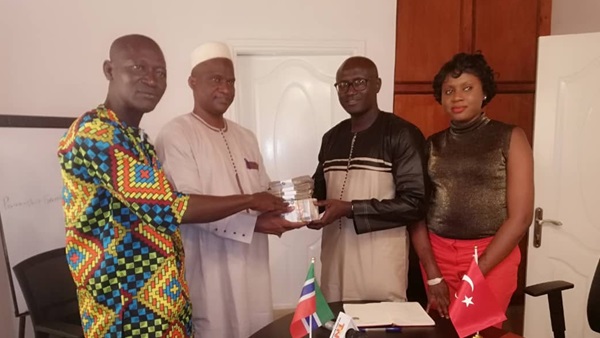 The day is universally observed on 5th June each year but the celebrations in The Gambia have been moved to this Thursday, 20th June because of the end of Ramadan festivities.

At the handing-over ceremony at Karpowership offices in Fajara, Yankuba Mamburay, the country manager, noted that since the commencement of its operations in The Gambia, Karpowership has been collaborating with the NEA. He said everyone has a stake in the maintenance of the environment as pollution, the depletion of the ozone layer and its resultant global warming pose existentialist threats to life on our planet.

“This is a concern to us and Karpowership is very much concerned about what happens to our environment.

As far as corporate social responsibility is concerned, we are not reactive; we are proactive be it in the education sector, environment protection or community empowerment.

Since we started operating in The Gambia a year ago, people have seen our positive impact in terms of electricity generation.

We are in different countries and continents and wherever we went around the globe, people immediately saw the impact because ours is a quick-fix solution. Instead of constructing power plants, we have ships that are ready to be deployed as and when required. We respond really fast and within a short span of about 60 to 90 days, we start generating electricity.”

Mr Mamburay said the donation to the NEA will contribute to environmental awareness “as we need to preserve the environment to ourselves and future generations”.

Mr Omar Bah, the registrar of pesticides at the NEA thanked Karpowership for the “laudable initiative” in meeting their corporate social responsibility.

He reminded that Karpowership has been a “close partner” and that everyone has seen its “landmark successes in augmenting the electricity situation in the country”.

He said World Environment Day affords the opportunity to disseminate environmental messages across all spectra of society including to schoolchildren.

He called on other corporate bodies in the country to emulate Karpowership’s “laudable gesture” in meeting their corporate social responsibilities.

He said the NEA has a lot of programme areas which are cross-cutting and that as a coordinating agency, they “cannot do it alone” and therefore count on the support of other stakeholders to help it meet its obligations.

Sheikh Al-Kinky Sanyang, the programme officer responsible for environmental education and communication, noted that the NEA wrote many letters soliciting assistance towards the commemoration of World Environment Day but only Karpowership responded positively.

He said the day is one of the main vehicles through which the United Nations Environment Programme mobilises for action and encourages positive action for the environment.

He said it provides an opportunity to broaden the basis for an enlightened opinion and responsible conduct by individuals, enterprises and communities in preserving and enhancing the environment.

Sanyang said the theme for this year’s celebration is “air pollution” noting that about seven million people prematurely die annually from air pollution.

He said the celebrations in The Gambia will be in the form of a weeklong programme of activities including a parade of schoolchildren from Westfield to NEA head offices and schools and community cleaning exercises.

Sanyang said without the help from Karpowership, the activities will not be “so successful” and therefore thanked them for their “unique effort and exemplary acts”.