Karpowership gives 5 ventilators worth about D6M to Gambia 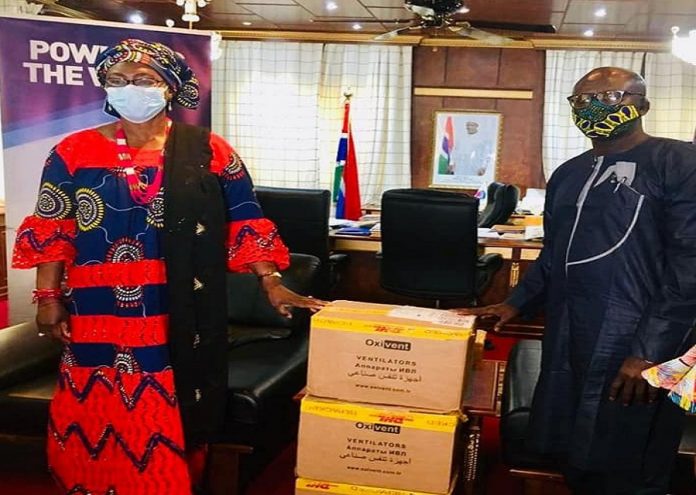 Karpowership energy company yesterday presented five ventilators worth about D6 million to the Government of The Gambia.

Receiving the medical equipment at State House, Vice President Isatou Touray, the chairperson of the Covid-19 Ministerial Committee, hailed Karpowership for its “timely assistance”and said the ventilators will boost the health ministry’s response in fighting the flu pandemic.

A highly-placed source at the ministry told this paper that there are about 20 ventilators in the country. However, the source could not confirm whether that number includes the five donated by Karpowership which had arrived in the country earlier.

Veep Touray noted that Covid-19 is a pandemic requiring a lot of resources and as such, government could not do it alone. “Karpowership takes its corporate social responsibility seriously and this is what is expected and we hope it will continue.

government and the people of The Gambia for its intervention,” she concluded.
Speaking earlier, the permanent secretary at the Office of the Vice President, Dawda Ceesay, explained that for patients with the worst effects of the infection, ventilators offer the best chance of survival.

Ceesay who served as a permanent secretary at the Ministry of Health, said a ventilator takes over the body’s breathing process when disease caused the lungs to fail.
He said according to the WHO, 80 percent of people with the Covid-19 disease recover without needing hospital treatment but one person in six becomes seriously ill.
In these severe cases, he noted, the virus causes damage to the lungs, causing the body’s oxygen levels to drop and make it harder to breathe.

To alleviate this, he further explained, a ventilator which has a humidifier that adds heat and moisture to the air supply to match the patient’s body temperature, is used to push air, with increased levels of oxygen, into the lungs.

PS Ceesay said if well maintained, the machines could be used post-Covid-19.
He thanked Karpowership for its “critical and outstanding”corporate social interventions.
Karpowership country manager Yankuba Mamburay said although his company is in the business of power-generation, it looks at development holistically and that is why since its establishment here in 2018, it has extended assistance to the health, education, environment and other sectors and to institutions and communities in the country.
“Since ventilators are vital in the fight against Covid-19, the management at our head office in Istanbul [Turkey] had the foresight to procure and send them to the people of The Gambia,” Mamburay explained.

Yesterday’s presentation, attended by the secretary general and head of civil service, Muhammed Jallow, was part of the company’s contribution to the national Covid-19 response. It distributed a million dalasis worth of foodstuff to communities in the country, followed by donations of additional foodstuff to the First Lady’s foundation and to the Lower River and North Bank regions last week.

D80,000 donation to NEA
In an unrelated development, Country Manager Mamburay presented D80,000 to the National Environment Agency towards the celebration of World Environment Day, annually observed on June 5. Next month’s celebrations will focus on biodiversity.
Mr Mamburay pointed out that the NEA is a strategic partner of Karpowership as it generates power from floating powerships anchored in maritime environment.
He said maintenance and preservation of the environment is the duty of all.

In receiving the donation, Alhaji Omar Bah, the programme manager and registrar of pesticides and chemicals and Sheikh Alkinky Sanyang, the programme officer for environmental education and communication, at the agency, described Karpowership as “valued and dependable” partners and expressed their “immense gratitude” for its support to them in marking annual days including International Coastal Cleanup Day.