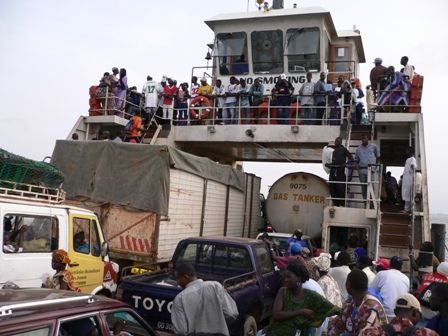 When will the situation in The Gambia change for the better? Will there ever be any efficiency that could lead the country to progress? Are you so used to the mess so you just don’t care anymore? Other African countries have been able to build up a society where you have good roads, affordable healthcare, good schools and so on, but The Gambia is so deep down at the bottom. Are you okay with this? Are you okay with the thought that our current government hasn’t done almost anything to improve your living conditions?

Are you willing to praise President Barrow for his lack of achievements, just because he is the president and some of you even believe that it is God who has placed him in that position? God doesn’t work that way, he doesn’t pull our strings and we go where he has decided to drag us. None of us can order anything from our wish list, God is not Santa Claus. President Barrow is a human being, as all of us, and he does his best to benefit from his current situation.

At the end of 2021 the situation will change, God willing, and we will have a new president in The Gambia. We need an educated person in the post, someone with visions for his country and who is willing to sacrifice his own comfort for his people. The situation of the country was different in December 2016, it was more of what I used to call an “oh, s**t experience”.

This is when something unexpected happens and you weren’t prepared for it.

The president wasn’t prepared to take over the most important position of the country, the people around him seem more focused on “what’s in it for me” instead of “what can we do for our country”. Am I naive to expect leading politicians to have a vision for their country? Perhaps I am, but that is what it should be about. Politics is dirty, many people say. Yes, it can be dirty, but it is not the politics, it is the politicians who change the rules to benefit themselves.

If we give up demanding change, our leaders will keep on scratching each other’s backs while they smile satisfied. The thought of a full bank account, a nice car, a house or two can put a happy smile on anyone’s face. The problem is that not everyone is anyone in The Gambia. Only someone has the fortune to be able to eat from the government food pots. Those who belong to that lucky crowd make sure to stuff themselves as much as possible. They never know when the sources will end, so it’s better to use any opportunity that comes in their way.

Nothing is efficient in The Gambia! Everything takes long time, sometimes it feels like it will take forever. Are you okay with that, or have you given up because you feel that you can’t be a part of that change we all so well need? Open your eyes and look around in the world. Nowadays you don’t need to travel around to see how people live in other countries. You can google one country per week, read about that and learn a lot. Everything you read gives you knowledge, even the things you dislike. Instead of automatically rejecting something you disapprove with, read about that, consider it for a while and use that new knowledge by learning how you DON’T want things to be.

The lack of efficiency is not only irritating, it can also be dangerous. The night between Monday and Tuesday this week one of the ferries going between Banjul and Barra broke down completely. This happened late in the evening and assistance didn’t come until the middle of the night. Considering that the ferries haven’t been going for a month, there are a lot of people and goods that need to cross the river. The ramp was supposed to be mended and the ferries were supposed to be maintained. How come only a few weeks after the ferry traffic had begun again, one of the ferries broke down?

What kind of maintenance was done? Was it made by blind people without any expertise in the area? The same old, dirty ferries, going slower than a dead snail, are supposed to transport people and goods across the river. They are supposed to be a safe way to travel, but the night between Monday and Tuesday this week became a nightmare! The ferry went slower than normal, only one of the four engines was working. Suddenly the ferry stopped, in the middle of the river. The staff tried to start the engines, but it wasn’t possible. The passengers became worried, the more time this took, but no one informed them about anything.

This is not how a professional ferry company is supposed to work. First of all: all ferries must get maintenance regularly. Second: if something happens there must be a proper procedure for how to deal with the problem and what to tell the passengers to ease their worries. Third: there must be procedures for how to get aid and how to move passengers from one ferry to another in the safest way possible. The staff working on the ferries must be properly trained, and only calm and level headed people should be allowed to work on these. There are personality test that can be used to pick out the proper people, these are used in railway companies and also airway companies for example.

Thank God that no one was injured or even worse, dead, when the poor passengers were forced to enter another ferry – while still out in open water. The passengers were exhausted after a long wait for aid. They were hungry and thirsty, irritated because of being tired and most of all – the lack of efficiency. It’s like no one’s life is worth anything in The Gambia. The time we are wasting because of poor maintenance on our logistic system, roads and ferries, means nothing for those who actually have the power to do something about it. So where does the money go? All the money that was budgeted for the ferries and the ramp – where did they go?

What about our roads? There is money in the budget for those too, but the pockets seem to have many holes. Those who are able to benefit from the money that is budgeted for the people of The Gambia, have their pockets lined with another layer of fabric. The money get received for their supposed work runs through the holes in their pockets to their secret hiding places.

As long as we allow corruption to destroy our society, there is no way to turn The Gambia to a prosperous country. The only ones who are prosperous are those who know how to use the system and milk it.

Lorries loaded with goods were stuck on the ferry the other night. Companies waiting for spare parts or items to sell were waiting in vain. Is this how it should be, because it has always been like that? If you wish The Gambia to get a better future, you must work for it. Don’t wait for someone else to do things for you, do it yourself! If this ferry breakdown would have happened in France, there would have been several demonstrations where people demand change. The press would have been writing about it and the politicians would have been debating on TV and online. What happens in The Gambia? How long are you okay with the country going backward? It’s time to make a change! Get active in politics and wash it clean!