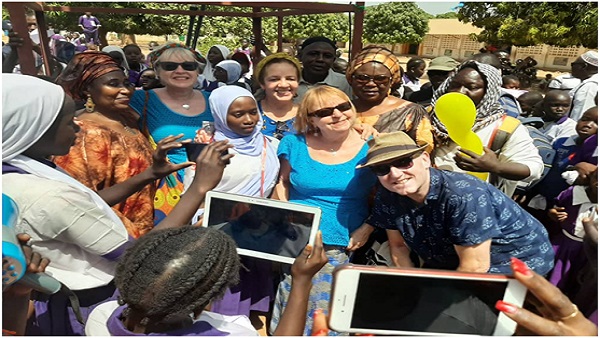 The borehole was sponsored by Sunshine Water Project based in the UKtogether with its Gambian counterpart Alhagie Darboe, who engineered the project.
According to the incoming headmistress of the school, the borehole was dug within nine days.Four standpipes were also erected.

In his opening remarks at the inauguration ceremony, Mr Amat Jallow, the outgoing headmaster of the school who lobbied for the project, noted: “It is indeed a great pleasure for me to stand here before you to show my appreciation to the sponsor of this project that came at a time when the school is experiencing difficulties in fetching water to drink and for watering our school garden.”

He appealed for greater support for the school, which he said was in dire need of furniture and class spaces.

However, he expressed his gratitude for the availability of potable water. “There are four taps from the borehole and two from Nawec. We also have a big reservoir in the school garden with two taps. All the achievements registered by the school during my tenure were made possible by Allah, through my able cluster monitor Mr Janneh Darboe, whose monitoring and supervision role was immeasurable,” Mr Jallow said.

Nimi Sylva, the incoming headmistress explained: “With a roll of 2,332 pupils, the school had only two taps, one in the garden and the other in the middle of the school. That being the case we always failed in our gardening activities”.
Madam Sylva thanked Mr Jallow, outgoing headmaster and the donors for the provision of the borehole and taps.

Helen Gettings, a Briton and head of Sunshine Water Project, explained that she first came to The Gambia 31 years ago, and fell in love with the country and her people.
Other speakers were Alhaji Kebba Kinteh, Janneh Darboe, outgoing cluster monitor and Alhagie Ceesay, incoming cluster monitor.

Certificates of appreciation were awarded to the outgoing headmaster of the school and the sponsors.