Large caches of explosives, obsolete arms and ammunition tobe destroyed in the Gambia 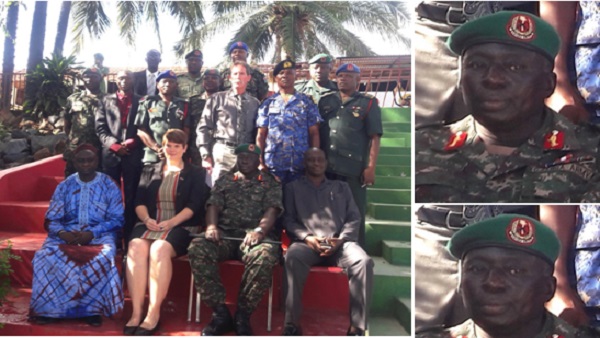 To limit the risk of unplanned explosions and illicit proliferation of small arms and light weapons in the Gambia, Mine Advisory Group (MAG) International in collaboration with the national authorities and ECOWAS Division on Small Arms are developing Standard Operating Procedures (SOPs) on ammunition and weapon destruction for the Gambia.

The aftermath of democratic change of Government in the Gambia in December 2016 witnessed the recovery of large caches of explosives, obsolete arms and ammunition at various security locations including the State House.

These were the statements made by Brigadier General Momodou O. Cham at the opening ceremony of a weeklong intensive training for senior military officers from the Gambia Armed Forces on behalf of the Chief of Defense Staff (CDS) Massaneh Kinteh held at the Joint Officers` Mess in Kotu.

Brigadier General Cham noted with concern that these constitute an unsafe conditions and constant risk not only to the handlers and the local population but also to the peaceful transition our dear country is undergoing.

He noted that the workshop marks the implementation stage of MAG-Gambia project which geared towards having a safe and secure environment free from the menace of explosives.

Brigadier General Momodou O. Cham
“Therefore the intervention of MAG could not have happened at a better time than now at this critical stage of our new democratic dispensation”, he pointed out, further noting that MAG in partnership with the Gambia Government has conducted technical assessment in 2017 during which all obsolete and dangerous arms, ammunitions and other explosives ordnances that currently pose hazard due to their bad state, inappropriate storage facilities and proximity to the population were identified.

To this effect, he said an initial report was presented in October 2018 which was followed by another assessment carried out early this year in order to update the needs and priority areas.

He disclosed that MAG`s intervention would include but not limited to improvement in the area of physical security, stockpile management, weapon marking, record keeping, and the destruction of obsolete arms and ammunitions.

Brigadier General Cham revealed that MAG has been in existence since 1989 and its mission is to save lives and build safer future by clearing landmines, cluster munitions and unexpected bombs, while also reducing the impact on communities of small arms, light weapons and ammunitions. Over the years, he quoted that MAG have helped over 18 million people in 68 countries, rebuild their lives and livelihoods. It is therefore his firm conviction that their presence in the Gambia would yield similar positive outcomes for the general security of the country.

Furthermore, he revealed that this workshop is mainly concern with the development of necessary Standard Operating Procedures (SOPs) in ammunition and weapon destruction and marking, which he said is an important stage as it will set out guidelines and safety measures necessary for not only ensuring a safe operating and working environment, but also a quality system in accordance with international best practices. He therefore challenged the participants to give their best with diligence and dedication to the training workshop.

In conclusion, Brigadier General Cham said he is convince beyond all reasonable doubt that the participant would receive the appropriate mentoring and information as well as be equipped with the relevant and requisite knowledge necessary to execute their functions in the field with efficiency effectiveness.

Alhagie Bah, Deputy Permanent Secretary at the Ministry of Defense and MAG focal point in the Gambia commended the Government of the Gambia for the implementation of the project in the development of Standard Operating Procedures for the destruction of ammunition and weapons and their markings.

Emilie Mbaye, Regional MAG representative and Mark Connell MAG Technical Field Manager both revealed that the workshop is part of a larger project implemented by MAG in The Gambia to limit the risk of unplanned explosion and limit the risk of illicit proliferation of small arms and light weapons. They expressed gratitude to ECOWAS and the German Government for their support, and will thus receive a report of this training workshop.

The two experts challenged participants to provide as much feedback as possible, because after the workshop, MAG will support them to put these procedures into practice.

“Next month, we aim to organize training in weapons marking so that we can support The Gambia in marking all her weapons.

This will send a positive message to regional partners and ECOWAS in particular who, this year, is celebrating the tenth anniversary of the Convention on Small Arms”.

The duo finally thanked the government of The Gambia for supporting this important project which in the end will ensure the security and safety of the Gambian people, precondition for the safe and prosperous socio-economic development of this West African state.

Major Bubacarr Bah, arms, ammunition and explosives specialist in the Gambia Armed forces, who is the current focal point for the ECOWAS MAG Project in the Gambia disclosed that the objectives of the training seminar is to introduce and sensitize Gambia Armed Forces (GAF) senior officers of the MAG`s Gambia project as well as remind them of the sub-regional, regional and international conventions and obligations on arms and ammunition ratified by the Gambia.

Major Bah said such instruments included the ECOWAS convention on small arms and light weapons, ammunition and other related materials.

To highlight the risks associated with the management of these dangerous stockpiles and their safety requirements, he said, led to the adoption by the Gambia Armed Forces to review, elaborate and development of Standard Operating Procedures (SOPs) on weapons marking, cutting and destruction of obsolete arms and ammunition. The week long training workshop, he said, was possible with financial support from the German Federal Foreign Office.

The ECOWAS Convention is a legally binding instrument regulating the manufacture, trade, possession, and disposal of small arms and light weapons, firearms, ammunition, that also include landmines, bombs and missile systems. The Convention was adopted on 14th June 2006 and entered into force on 29th September 2009.